Toyota maintains strict regulations for managing confidential information at all locations, including its headquarters, local sites and plants. It can be difficult for Toyota employees and subcontractors to communicate effectively from a remote distance.

Toyota Motor Corporation (Toyota) has an 80-year history as the automotive organization of Toyota Industries Corporation, a textile machinery manufacturer. Today, “TOYOTA” is renowned as one of the world’s leading car manufacturers and is headquartered in the city of Toyota, a company town. Toyota has numerous R&D, production and sales locations worldwide.

Toyota’s production engineering and production staff oversee the installation of new manufacturing lines and the maintenance of existing manufacturing lines and plant buildings around the world. Because this work is typically done by local Toyota personnel and subcontractors, the departments that oversee the operations at these worldwide plants must visit each site to ensure that work is done correctly and safely.

If an issue with plant machinery arises at a site, subcontractors cannot make decisions to resolve the problem on their own due to potentially hazardous conditions. Instead, a Toyota employee must travel to the remote location to review the issue. There are even instances when a higher level manager from Toyota’s headquarters must also visit the site to assess the issue and make the final decision on how to resolve the problem. At times, it is very difficult for an employee to travel to the factory site as construction is usually carried outduring the factory’s off-hours and on holidays.

Because Toyota maintains strict regulations for managing confidential information at all locations, including its headquarters, local sites and plants, it can be difficult for Toyota employees and subcontractors to communicate effectively from a remote distance. “Safety permissions based on on-site confirmation are a very important part of our process,” says Ms. Aya Miyazaki from the Powertrain Production Engineering Planning Department. The use of cameras, devices and software that could lead to an information security breach is strictly prohibited. While these measures are necessary to maintain information security, the inability to freely record information often leads to inefficient processes. 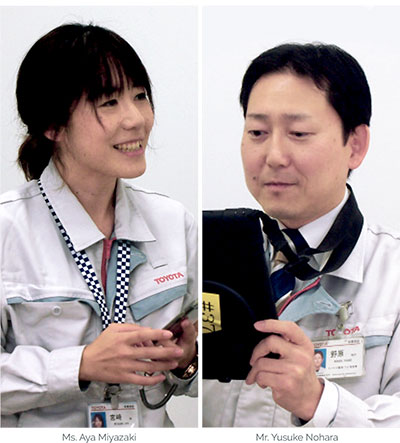 Ms. Miyazaki and her colleagues found PTC’s Vuforia Chalk when researching a software solution that maintains secure communication and adheres to information restrictions at the same time. Vuforia Chalk is a simple remote assistance tool that connects subject matter experts with workers both inside and outside of their organization via mobile or tablet. Vuforia Chalk combines live video, audio and the ability for both participants to draw digital annotations on their live shared view for real-time visual collaboration and problem solving.

Using Chalk, the subcontractors are able to tackle complex or unfamiliar challenges with the help of an expert where and when they need it. In addition to its ease of use, the company decided to adopt Chalk because of its security control functions.

“In addition to Vuforia’s secure connectivity, PTC customized the tool to ensure that no data is saved on iPads or iPhones. These capabilities helped us meet our internal information security standards,” says Ms. Miyazaki. iPads pre-installed with Vuforia Chalk were distributed to all the plants. The plants loan their devices to contractors for their use.

Mr. Yusuke Nohara, a senior expert in the development and experiment unit of the Manufacturing Development and PJT Promotion Department, heard of the adoption of Chalk through an internal Toyota announcement and became very interested in the product for his own use. He contacted Ms. Miyazaki to demo the tool and eventually Mr. Nohara started testing Chalk with his own organization.

Mr. Nohara says he was thrilled to be able to share the same view as a contractor joining the session remotely. He could teach and communicate with both people looking at the same object. “When there is an error on a machine, for example, I just ask them to put a circle on the affected area and can see one being drawn on the screen. If I want to give them a specific instruction, I can draw that on the screen. This is very convenient,” says Mr. Nohara.

This may seem simple, but the impact of permitting this type of technology and communication is significant. Information is now communicated more effectively than with phone calls. “In the past, section managers traveled four times a month to give safety permissions on-site, spending 4 hours on each trip. We can eliminate this, which is a big deal for us,” says Mr. Nohara.

“For example, when measurements of a tall machine needed to be taken, three people had to spend more than a day to complete the task since the only way we can measure such a tall machine is by a licensed technician climbing up and down the machine repeatedly. Any measurement error would lead to rework,” says Mr. Nohara. Now with Vuforia Chalk, the technician can use their mobile phone to share their view of the machine with someone at the headquarters, and he/she can give instructions to the technician on-site. Only one technician needs to travel to the site, and the time it takes for the team to take the measurements can be reduced significantly.

Vuforia Chalk is helping employees communicate not just between teams in different locations, but also between employees in the same building. Before the tool was deployed, it was often challenging for people to give instructions to someone verbally without an image or a video clip. “If I sent someone to pick up a part, but he/she brought back the wrong part, I had to send him/her back to get the right part. If the verbal description is not fully understood, he/she would bring back the wrong part again. I am happy that we can eliminate such an issue,” says Mr. Nohara.

Overall, Vuforia Chalk resolved Toyota’s need for better safety and communications in their manufacturing plants, while also discovering additional use-cases for the tool across other departments.