19 Crimes Uses Augmented Reality to Differentiate Their Brand Through Innovation

To stand out from the hundreds of thousands of other wineries and brands, TWE wanted to add an experiential element to selecting and purchasing wine that could drive engagement while bringing the story of their 19 Crimes brand to life.

Treasury Wine Estates (TWE) is an innovator in the wine industry

“Glasses up! Let’s make a toast, to success and nothing less. Yessir,” Snoop Dogg says from the 19 Crimes wine label, his lips moving and his voice unmistakable. Through a unique augmented reality experience, Snoop Dogg and the 19 Crimes historical figures from the 1800s are able to tell their stories of redemption directly to consumers. Since 2017, 19 Crimes has delivered a cutting-edge experience that delights wine drinkers everywhere and differentiates themselves as one of the most unique wine brands on the shelf.

TWE traces its roots back to the establishment of several new world wineries in the 19th century, including Lindemans (1843), Penfolds (1844), and the Beringer Vineyards (1876) in the United States.

Through these wineries, TWE built a long history of blending, art, science, and innovation. They have leveraged their commitment to innovation and continuous improvement to become one of the world’s leading wine companies. They make trusted, premium wines from some of the world’s most renowned wine-making regions in Australia, New Zealand, and Europe, and sell them to consumers in more than 70 countries.

TWE is dedicated to realizing its ambition of becoming the world’s most admired wine company by boldly leading change in the world of wine. The innovative 19 Crimes label is a great example of this commitment to progress and innovation.

Walk down any wine aisle and your eyes are sure to jump to the labels of the 19 Crimes bottles. 19 Crimes celebrates the rebellious spirit of more than 160,000 exiled men and women convicted of at least one of the 19 crimes that resulted in a sentence to live in Australia, rather than death. As pioneers in a frontier penal colony, they forged a new country and new lives, brick by brick. With the development of its first California wine, 19 Crimes cast a contemporary lens on the brand. In keeping with the spirit of 19 Crimes— rule breaking, culture creating, and overcoming adversity—entertainment and California icon Snoop Dogg was the obvious brand partner for their next release. The partnership has since led to the unveiling of the “Snoop Cali Red,” which has become popular among American consumers. The unique nature of their brand is something TWE planned since the inception of 19 Crimes. “From the start, 19 Crimes has always been thought of differently in terms of how they communicate with consumers,” says Ming Alterman, Director of Digital, Performance and Partnerships at Treasury Wine Estates.

Differentiation in the wine industry is challenging 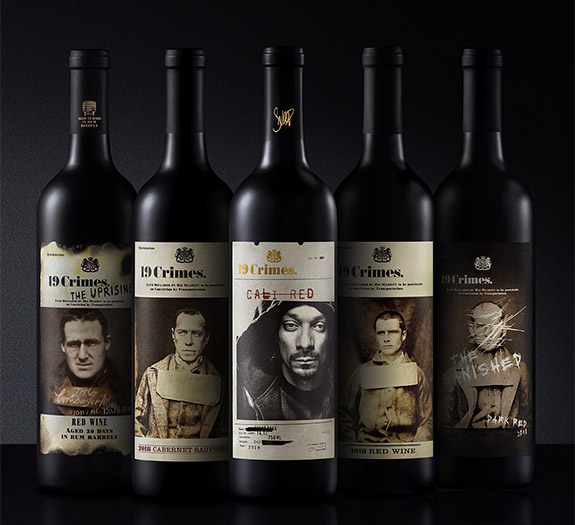 Standing out in the wine aisle is challenging. Consumers are faced with countless options, and often have very little information on which to base their purchasing decision. “Wine is a confusing category. There are hundreds of thousands of wineries and brands. So as a consumer, how do you choose from that when many bottles look the same and there isn’t much information on the label?” says Alterman. These challenges also exist in sales meetings, where brands need to quickly capture the attention of large grocery chains. TWE wanted to find a way to add an experiential element to selecting and purchasing wine, and make its brands stand out beyond the traditional neck tags and shelf wobblers. “We asked ourselves the question, how can we ensure we stand out in the wine aisle and in sales meetings?” says Alterman.

To differentiate themselves from the competition, TWE embarked on a journey to become the first wine company to introduce augmented reality technology on wine labels. 19 Crimes, in partnership with the immersive experience experts at Tactic Studio and the creative agency Wunderman Thompson, envisioned an augmented reality application that would bring their brand story to life. They recognized that augmented reality was an opportunity to fuel brand awareness and tell rich, historical stories in a fresh and innovative way. “The 19 Crimes brand is all about firsts. Augmented reality was a game changer. You could see the light bulbs go off when we were brainstorming,” says Alterman.

TWE selected Vuforia Engine—the leading development software for creating powerful, photo-realistic augmented reality experiences—to use for their augmented reality application. Tactic Studio, who leveraged their specialty in character animation and visual effects to help create the integrated experience, had worked closely with Vuforia Engine in the past and knew it would be the right tool for the job.

“To do augmented reality right, you really need a technology partner and engine that brings beautiful, creative ideas to life. We felt PTC’s Vuforia Engine was the right platform and engine to do that.”

~ Ming Alterman, Director of Digital, Performance and Partnerships at TWE

Through the Living Wine Labels augmented reality application, the men and women featured on the 19 Crimes bottles literally come to life in front of you, narrating their harrowing stories in their own words. Take John Boyle O’Reilly for example. Once consumers download the Living Wine Labels app, they simply point their phone or tablet at the bottle. The photo of O’Reilly comes to life as he furrows his brows and begins to tell his story: “I was banished to Australia, for crimes against the crown.”

While sipping a bold, delicious red blend, consumers learn about how O’Reilly, a member of the Irish Republican Brotherhood, was transported to Western Australia and eventually become a prominent spokesperson for the Irish community through his editorship of the Boston newspaper, The Pilot. “The augmented reality experience is edgy, and it’s based in a historical story. You can share at a party and it’ll be a showstopper,” says Alterman.

40% increase in volume
of cases sold

The success of the 19 Crimes augmented reality application was undeniable. While the experience began as a standalone app at first, the immediate success led TWE to create the Living Wine Labels app and expand to other brands. Currently, they have nine brands leveraging a unique and compelling augmented reality experience, including Gentleman’s Collection, Wolf Blass, and Matua.

Consumers absolutely loved the experience and drove downloads of the Living Wine Labels application into the millions. The Living Wine Labels application has had a total of 5.5 million downloads since going live in July 2017. The experience has been used 22,168,625 times. And that wasn’t all: from 2017 to 2019, the volume of cases sold increased by about 40%.

“From a consumer lens, it’s really fun, and the proof is in the pudding with social sharing,” says Alterman. “I think the wine industry hadn’t seen anything like that before. It really increased our brand awareness, largely because of the AR application.”

The unique augmented reality experience— along with the clear uptick in sales and impact on consumers—also caught the attention of major retailers, fueling more effective sales conversations. “Across the board, we received feedback saying they’d never seen anything like this in wine,” says Alterman. “Retailers love products that keep people in the wine aisle, and people are scanning on the shelves.”

Since its release in 2017, the augmented reality experience has helped 19 Crimes win a number of industry awards. 19 Crimes was featured on the influential wine publication Shanken News Daily’s Impact Hot Brand list for its fifth consecutive year in 2020. In 2017, they were named Wine Brand of the Year by Market Watch. The same year, TWE and its agencies won a prestigious Super REGGIE award from the Association of National Advertisers, which recognizes the highest level of achievement in brand activation marketing campaigns.

Adding to their list of achievements, Alterman said: “Apple featured us as one of the best apps to download in wine. We were ranked in the list of Top 50 non-paid food and drink applications in Business Wire. Our momentum really grew organically over time.”

The application was successful not only from an engagement and business value standpoint, but also in terms of marketing efficiency. “This application and the buzz it generated became a large part of our marketing and media efforts,” says Alterman

Recently, 19 Crimes launched their Snoop Cali Red line in partnership with Snoop Dogg. When TWE wanted to put a modern spin on the 19 Crimes redemption story, Snoop Dogg—famed musician, family man, and culture creator—was a natural fit. Now, the augmented reality experience brings the rapper to life in dining rooms around the world. Since its launch in early July, consumers have activated the Snoop Dogg experience more than 500,000 times and viewed it over a million.

“To have a celebrity come to life, especially like Snoop, through augmented reality is really, really cool, especially because he’s on the bottle. It really feels like Snoop is talking to you,” says Alterman.

With the success of 19 Crimes and the recent Snoop Dogg line, TWE isn’t stopping there. TWE is excited to continue creating compelling augmented reality experiences for their brands. “The application was really beloved by consumers. That’s why we decided to invest more,” says Alterman. “AR is not a gimmick and it’s here to stay for the wine industry. We’ll be there for the long run as it continues to develop, and we find new ways to use it to engage and excite customers.”

“AR is not a gimmick and it’s here to stay for the wine industry. We’ll be there for the long run as it continues to develop, and we find new ways to use it to engage and excite customers.”

~ Ming Alterman, Director of Digital, Performance and Partnerships at TWE