To provide a critical boost to sales and engagement in an extremely competitive holiday market, Tactic needed to create a new interactive AR experience for Coke’s mobile app around its holiday-themed cans and bottles.

Sometimes, standing out from the crowd comes down to having a familiar face—and in this case, two fuzzy ears and a warm holiday grin. People around the world have come to know and love the iconic Coca-Cola holiday polar bears. And while most will never come truly up close and personal with a polar bear, one creative studio devised a way to bring them from the depths of the North Pole to the warmth of the living room. Learn how a giant in the beverage industry captivated audiences, improved customer engagement, and increased sales by using augmented reality to bring these iconic characters to life.

In today’s global economy, brands must keep pace with technology

The consumer product industry has been steadily growing over the last few decades. Consumers often have dozens of choices or more within a single product area. According to a recent consumer engagement report, 57 percent of customers say they’ve stopped buying from a company because a competitor provided a better experience. With an increasingly large number of competitors, consumer brands need to find a way to make their products stand out above the rest—and a flashy label or catchy jingle just isn’t enough anymore.

One company that has experienced success with this type of visionary thinking is The Coca-Cola Company, which set out to offer a new interactive experience just in time for the holidays. They did so with the help of San Francisco-based Tactic Studio, a creative agency that makes experiential content of all types, with the ability to specialize in augmented reality (AR). With Tactic’s ability to bring technology to the table, Coke’s vision for an interactive holiday experience came to life for consumers everywhere.

In the world of consumer products, timing a new release around the holidays can provide a critical boost to sales and engagement by connecting products with memorable experiences. Coke’s recent holiday campaign accomplished this feat, serving as a successful model for consumer brands around the world.

57% of customers say they've stopped buying from a company because a competitor provided a better experience.

Coke and Tactic had already been discussing potential collaborations when the upcoming holiday season presented a new opportunity—one in which Coke could test the value of an interactive AR application. There was a short but opportunistic window for the two teams to create a new interactive consumer experience around Coke’s holiday-themed cans and bottles. Coke opted to integrate the AR functionality with their existing app; not only were many consumers already familiar with the app, but the new experience would encourage extended use beyond the holiday season.

Tactic was no stranger to building interactive AR experiences around bottled beverages. In a previous high-profile project, Tactic created an AR experience around a series of wine labels, resulting in great visibility and sales for those brands. Coke wanted a similar application that would move product, increase engagement, and drive repeat purchases. The stakes for Coke were particularly high: not only did they need to meet high brand expectations for consumers, but they were also executing product and brand differentiation in an extremely competitive holiday market. 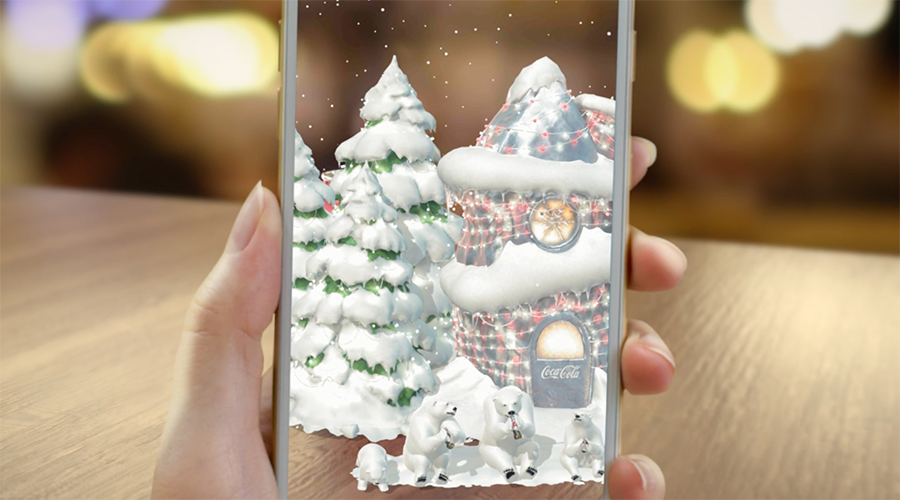 Knowing they wanted to create an engaging AR application, Tactic had to solve for one key challenge: how to attach the 3D objects to the cans and bottles. A cylindrical object like a can or bottle can be difficult when working with AR. The inherent shape of a cylinder doesn’t have edges, so a regular image target has difficulty tracking when wrapped around a bottle. This could cause the digital object to appear distorted through the viewfinder. What’s more, cans and bottles often have reflective labels that can be hard to target using AR.

Having previously worked with Vuforia Engine, Oberdorfer also knew that it offered compatibility with a wide range of devices and operating systems, including Unity, a game engine frequently used by Tactic to create mobile apps.

Having first debuted in a European print ad in 1933, the Coca-Cola polar bears are some of the most beloved, time-tested holiday icons in popular culture—so it came as no surprise when Coke wanted to wow consumers by bringing them to life through AR.

To save time and simplify the end-to-end experience, Tactic used Coke’s existing app as the foundation for the new interactive holiday experience. With the new AR experience, users could launch the app and scan the side of a Coke can or bottle through the camera of their mobile device. On screen, they would see a real-time virtual scene in which the iconic Coke polar bears came to life, playing in the snow, sliding down an icy mountain, and even throwing snowballs at the user. If the camera saw two bottles sitting next to each other, it would simultaneously create a dual winter wonderland scene with a cast of characters from both bottles.

To create the holiday magic, Vuforia Engine worked via hidden markers within the polar bear images. When the mobile device camera detected the markers, the app automatically triggered computer-generated content within the Coke app. With excellent extended tracking, Vuforia Engine also maintained the virtual scene, even if the target moved in and out of the camera’s view. This caliber of cohesive tracking created a much more robust and engaging customer experience.

This was really about the magic of Coca-Cola during the holidays—and bringing that to life through their iconic polar bears. We wanted to create moments where people could come together to share in that magic, all around a can or bottle of Coca-Cola. Peter Oberdorfer, President of Tactic Studios

The finished product hit all the right marks for Coke

The build-up to the holiday season is always a time of great anticipation for consumers all over the world—and Coke certainly didn’t disappoint with their AR experience. Within the first week of release, activation had already reached into the hundreds of thousands, largely driven by Coke’s compelling campaign around the holiday app experience, combined with a strong call to action on the packaging. What’s more, most of the increased downloads and usage was based simply on organic sharing, saving marketing dollars in the long run.

Consumer feedback indicated the resounding success was tied to ease of use and a lower barrier to entry. With the updated version, consumers could launch the app and immediately engage with the AR experience without needing to log in. Accordingly, Coke gained new users and retained old ones by offering them new ways to engage with their product. Additionally, users that engaged with the holiday app experience were rewarded with a surprise limited-time offer for the new Coca-Cola Cinnamon, driving even more product engagement.

In addition to providing outstanding customer support for Coke, Tactic built the foundation for a continued relationship. And Tactic’s success didn’t go unnoticed, either. They were able to branch into new areas of work and secure new clients, all thanks to the unlikely duo of AR and polar bears that paved the snowy path to widespread success.