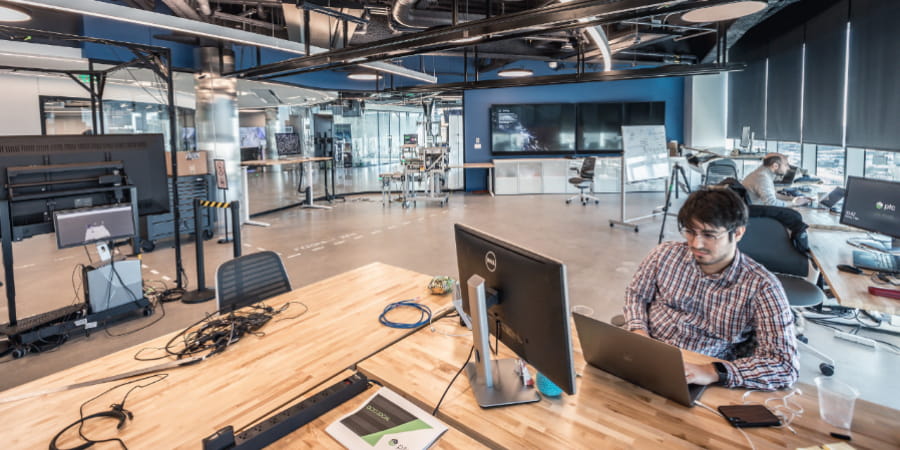 At the PTC Reality Lab, there is time set aside on Fridays to “play.”

But they’re not heading out to the golf course, or pulling out a Monopoly board, rather this time is designed to let their creative juices flow, to dream up fun ways to use (and apply) augmented reality (AR).

“It’s fun, quick experiments, but usually there’s something in there that could have long-term impact or connection to industrial challenges,” says Christian Vazquez, Senior Innovation Engineer at the PTC Reality Lab.

One of the results of “Play Friday” was the whimsical ARigami feature they put together during the 2018 holiday season. It gave instructions to create an origami Santa Claus via augmented reality. While it was all in good fun, it also demonstrated the power of AR-based learning – something that is gaining traction in industrial settings. According to our latest State of Industrial Augmented Reality report, about 1 in 5 companies using AR are leveraging it for training purposes.

Describing himself as the “wild card” of the Reality Lab, Vazquez appreciates a playful approach to innovation – and believes it’s a necessary part of the process. “We need to be able to play around with what may seem like wild experiments to see what works and what doesn’t.”

Like several other PTC Reality Lab team members, Vazquez is an alum of the MIT Media Lab. He has a diverse background that includes (and intersects) language, art, engineering, and technology.

Originally from Puerto Rico, he studied computer engineering at the University of Puerto Rico before making his way to Boston. He was part of the MIT Lincoln Laboratory, a U.S. Department of Defense R&D center focused on applying advanced technology to national security issues. Working in the human language group, he took part in developing natural language processing through machine-learning algorithms.

In addition, he’s spent time in Google Research, and did several research projects exploring how Google Glass (or similar AR wearables) could be used in language learning through its auditory sensors. At the Media Lab, he continued and expanded on this research into AR/VR technologies.

His creativity extends beyond technology, he’s also a musician, fiction writer, and artist. “To me, it’s all connected and comes down to one thing: creating something.”

This idea of creating something has manifested into one of his research focuses at PTC: additive manufacturing. It’s becoming increasing prevalent in the industrial space, but in many ways it’s still a disjointed and laborious process.

“3D printing is not an easily approachable task; there are multiple pieces of software involved, all with a lot of steps. If you make a mistake, there isn’t a good feedback loop to know what you did wrong. What we’re looking to do is streamline the process there,” Vazquez explains. “Augmented reality technology could hold the key to this type of cross-domain interaction – and making 3D printing easier.”

Vazquez and the Reality Lab team made a video to show the potential of this type of technology (see below). The user brings 3D content, in this case a bunny, from the browser into 3D space and makes it real by directly inserting it into the 3D printer. The AR interface delivers an interconnected interaction model to an otherwise disjointed 3D printing process.

This technology works with other 3D models and is applicable to the wider CAD space. The industrial applications are endless – imagine being able to pull up a machine part on a CAD platform, pull it from the screen, and print it in one seamless interaction.  As additive manufacturing continues to become more prevalent, this type of technology could be a game-changer.

Check out this similar video showing the process with an engine casing:

What’s featured in the video is an early iteration. Vazquez explains: “It’s designed to show potential and possibility.”

Stay tuned for updates and insights on PTC’s Reality Lab here on our blog. Keep tabs on their exciting work by following them on Twitter, @PTCRealityLab.