A Mission to Improve Quality of Life

A mission to improve quality of life

Success at a glance

Sometimes inspiration comes from the unlikeliest of places.

In the 1990s, mechanical engineer Jos Poirters designed and built robotic characters at the famous Efteling amusement park in the Netherlands. After moving to Norway with his Norwegian wife in the early 2000s, he met a young girl who was born without her left arm. The encounter inspired a decade of research and development that led to the invention of the world’s first hydraulic hand. In 2015, Poirters teamed up with CEO Christian Fredrik and two others to create the medical device company Hy5.

“Our mission is to improve the quality of life for amputees and people who were born without a hand,” explains Hy5 Chief Marketing Officer Ole Olsen. “Our product is creating a mid-market segment which previously didn’t exist. MyHand is a basic open-and-close hand like a pincher, but you also have the ability to actively manipulate the fingers and do different grips. And because of the hydraulics, the users have much more strength, and their grip is adaptable to any objects they grab.”

The name “Hy5” has a dual meaning. The “Hy” is short for “hydraulics,” combined with the more noticeable reference to a “high five,” the nearly universal hand-slap greeting or gesture of celebration.

Hy5’s MyHand is controlled by electronic sensors that connect to the user’s arm muscles. The hydraulic hand’s titanium fingers are able to produce a very stable grip on most objects. Differentiating MyHand from the basic open-andclose pincher prosthetics is the versatility of its grip options. The operator can pinch, as needed for picking up a coffee cup or small object; make a fist, as needed for carrying heavy bags or clutching a backpack; point, as needed to gesture at people or objects, or press buttons; form a tripod, as needed for picking up small objects such as a pencil—which is useful when the pinch grip does not have enough precision; and finally power grip, as needed when all fingers must have contact with the object, such as when using tools or opening a jar. 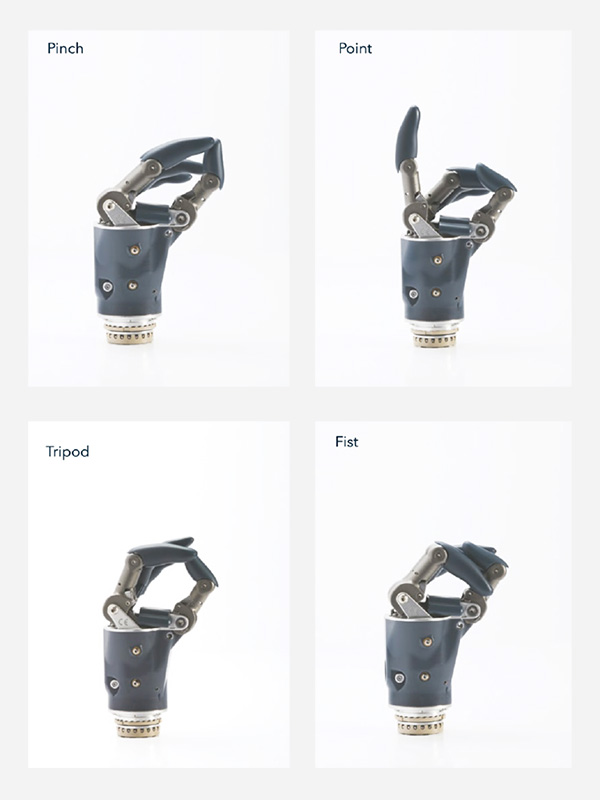 Ola Kyrkjebø, a mechanical design engineer at Hy5, has been using a prosthetic pincher hand since he was 12 years old. He says he’s always had to put his prosthetic hand in an odd position when lifting heavy grocery bags to prevent the bag from slipping out of his grip. In contrast, the MyHand’s power grip holds bags and types of handles in a secure manner.

“Yes, my life experience does offer a valuable perspective in our design process, but I always say we have to be careful that we don’t develop a hand just for me,” Kyrkjebø says. “People have so many different expectations from a prosthetic hand, so it’s important for us to get feedback from a wide range of users.”

He adds that “some of the high-end hands on the market can do 15 to 20 different grips, but users we’ve talked to say they really only need a few of those throughout their day. We want to be really careful that we aren’t developing fancy features that nobody needs.”

Hy5 has also developed a prosthetic glove called “MySkin” that fits over the hydraulic hand and protects it from water and dirt. The silicone glove, which is available in several different skin colors, also creates more friction for a better grip.

The benefits of cloud-native product development

The Hy5 engineering team switched from filebased, on-premise CAD to PTC’s Onshape in 2016, during the early days of the MyHand’s development, because they wanted to move to a SaaS product design platform.

“Mostly all the parts have since been redesigned in Onshape,” Kyrkjebø says. “In the cloud, the iteration process is just faster and easier. Onshape allows multiple people to be working on the same design at the same time, but they also can be working on alternative branches. I’m not afraid of making a lot of variations,” he says, referring to Onshape’s branching and merging feature. “You can make as many changes as you want and then do a design review and choose which version is best. I’ll often say to colleagues, ‘Hold on, give me 30 minutes and I’ll model what I’m thinking about.’ And then if the idea is approved, I can just merge it into the main design.”

“It was always frustrating when you knew which parts you needed to work on, but they were checked out by somebody else. Then you had to figure out who this person is and ask them to check the parts back in the vault. It’s a huge waste of time when the system works like that,” he says. “But in Onshape, there’s no time spent claiming and un-claiming files. It’s easy to follow different revisions, and you have full control all the time.”

“In the cloud, the iteration process is just faster and easier. Onshape allows multiple people to be working on the same design at the same time, but they also can be working on alternative branches.”


With Onshape’s real-time data management, when one member of the design team makes a change online, everyone else instantly sees it. A comprehensive edit history tracks who made what revision and when, allowing for a quick return to any prior state of the design.

Kyrkjebø says he doesn’t measure Onshape’s time savings in minutes and hours, but in prevented “frustration and tears and how many screens you want to throw at the wall.” He continues, “I’m only getting more and more fond of Onshape the more I use it.” 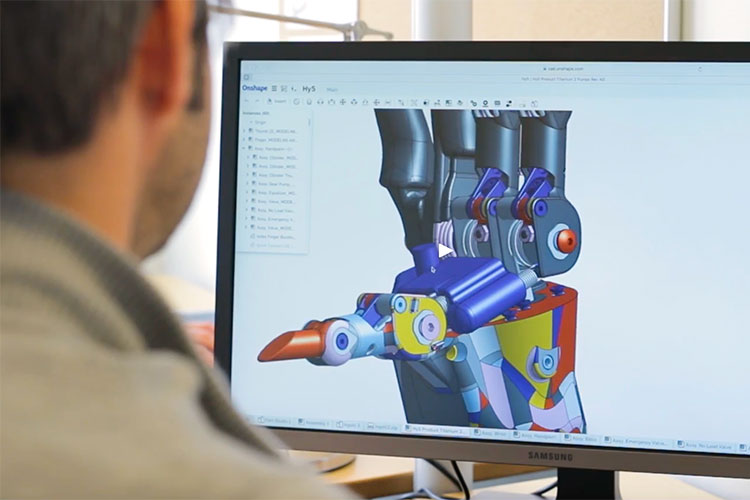 Hands across the world

Hy5 is devoted to providing affordable highfunctioning prosthetic hands to people who previously could only access basic grippers.

One of Hy5’s mission statements is the assertion that “all people, across all geographic, demographic, and socioeconomic areas, should have the right to the highest possible quality of life, including full mobility.”

So far, about 50 MyHands have been delivered worldwide, and the company plans to fully roll it out in countries with advanced healthcare systems first, and then determine how to make hydraulic prosthetics affordable for people in developing countries. The current business model is for the device to be fully or partially subsidized by health insurance.

Hy5 has started with one size for MyHand and MySkin, fitting an average-sized male or largesized female hand, but plans to release youth sizes soon.

“I first started at the company with design and development and then moved to marketing and sales,” reflects Olsen. “Seeing the joy in users when they first try the hand that we’ve been working on for years is a great feeling. It’s very rewarding to see the entire design process, from learning what users want to making iterations and delivering a product that improves people’s lives.”