Technology in Sports: IoT and AR in Football 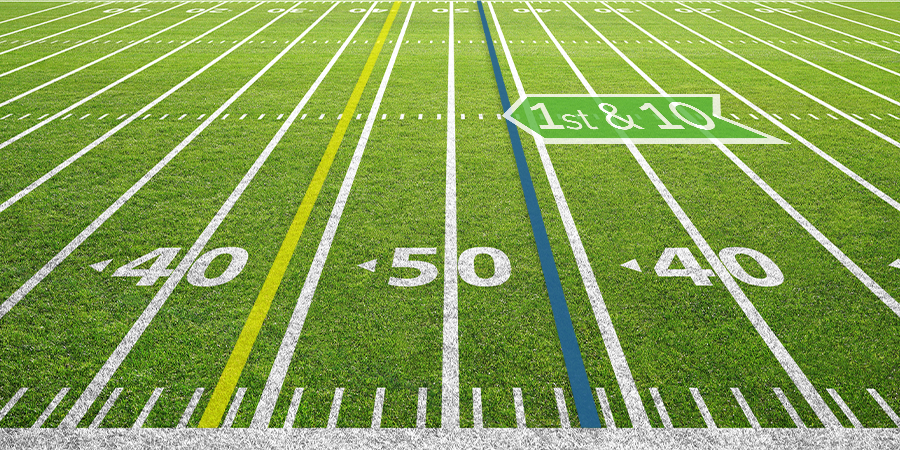 Technology is playing a major role in the digital transformation (DX) of popular pastimes like American football. From added efficiency, improved personalization, and increased revenue, the convergence of the physical and digital worlds through the Internet of Things (IoT) and augmented reality (AR) is helping the game thrive.


5 Ways Technology Is Leveraged to Improve the Game of Football

As rules and regulations have changed, so have the ways we watch the game and interact with our favorite teams. Most fans don’t go to a game without their smartphone these days. Schools, stadiums, and leagues have had to adapt to fans’ constant need to be connected on social media in order to share experiences before, during, and after a game. The experience of the game needs to include the viewers, no matter where they are, whether it’s through an app, on a TV, or in person. Similarly, the behind-the-scenes and on-the-field strategies are changing for teams as new resources become available to improve their performance, game plans, and ability to compete. Combined, IoT and AR deliver an enhanced way to watch and interact with the sport people love in a convenient, fun, and contextualized way.

Here's a deeper look into how IoT and AR are being implemented in football:

Thanks to technology, fans watching the game from home are just as in tune with the live action as fans in the stands. The evolution of the yellow first-down line -- first introduced in 1998 -- is just one example of AR on game days. Since its debut 21 years ago, it has evolved to depict real-time data. The 3D animation appears on the screen to assist viewers and improve their experience. Broadcasters also use AR in visual trajectories of a ball or player with virtual lines and graphic overlays. The technology has come so far since the early days of football broadcasting. Could you imagine watching a game without all of the visual assists today?

The integration of IoT and AR technologies results in an improved in-venue experience with real-time insights delivered to fans quickly and efficiently. This includes apps catered to specific stadiums and customized fan experiences for everything from ordering tickets to in-person and virtual interactions with team, game, and stadium features. In and out of the stadium, fans can take advantage of AR.

“Smart” stadiums leverage DX technology by connecting products, processes, and people. Theatrical experiences have been integrated seamlessly into the physical structure of stadiums to enhance fan interactions on game days. The motivation to draw fans from couches to stadiums comes with an infrastructure that leverages IoT to collect real-time data using sensors and cloud-based platforms. Where do you see the impact of IoT? Think parking, restrooms, concessions, and more, which are all accessible at the palm of your hand with a smart device. Take this stadium for example, which also keeps fan safety in mind. Fans are directed from the parking lot to their seats in the most efficient route and can instantly communicate with stadium security via the app with any concerns in a discreet two-way interaction.

Football teams have taken advantage of the marketing opportunity that apps on smartphones and tablets provide. Using these devices, fans can download a team or social app to use filters that show team spirit. These apps can depict live data from the game (e.g. the score) that can then be shared on social media. Along with smartphones, TV broadcasts also cater to the audience using digital advertisement overlays with AR to tailor content to regions. The ads seen on the side of a stadium target audiences and change on TV but remain static in-person.

The world of football has come a long way since the early days of leather helmets and barely-there-padding. Today, gear is designed to improve player performance with IoT, which makes it smart and connected. This includes shoes, shirts, and mouthguards that collect data that coaches and players can analyze. When it comes to the actual training, there are various AR apps available that connect to the player’s gear to guide practice routes and create simulations. These 3D simulations give athletes real-time feedback as they follow the AR experience displayed in front of them. By improving performance, players are also more likely to reduce common injuries, like concussions, which is reflected in the data collected from apps and wearables.

Having a solid game plan in football is how teams succeed, so why wouldn’t they leverage their best option? There’s no need for a Hail Mary if the strategy and implementation are strong from the beginning. By optimizing and “putting in” IoT and AR, which are the star players, franchises can enable efficiency, personalization, and increased revenue to ensure they are well on their way to their team’s next W.

Delaney McDevitt is the marketing copywriter for the PTC Academic Marketing team. In her role, she creates content that embodies the Academic team's mission to empower students and educators to succeed in the digital transformation era.

As a professional writer, she has experience in copywriting, editing, email marketing, content strategy, blogging, document design, and creative writing.