Spatial Analytics: Solving Challenges One Space at a Time 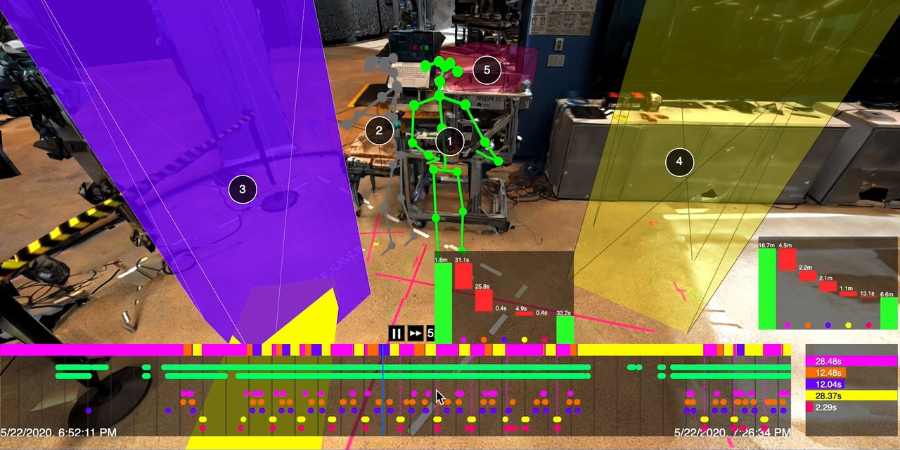 James Hobin, senior innovation engineer at the PTC Reality Lab, has always loved computers and the opportunities possible with programming.

“Since becoming a true wizard is out,” he quips, “I figured programming is the closest thing – getting computers to make magic instead of a wand to make magic.”

And there is a kind of magic happening at the Reality Lab. At the forefront of innovation in the industrial space, they are researching emerging technologies like augmented reality at architecture scale, spatial computing, and the future of human-computer interaction.

While Hobin joined PTC about a year ago, he is not a stranger to the research the group is doing on spatial computing and augmented reality. In fact, he was there in the early days and his involvement with the technology spans years.

As a freshman at MIT, he contributed to the project that has evolved to Vuforia Spatial Toolbox at the MIT Media Lab under the direction of Dr. Valentin Heun and alongside Ben Reynolds, both now colleagues at the Reality Lab.

After spending nearly his entire undergraduate working on this research, he stepped away from the project to spend his senior year creating a platform for crowdsourced robot design.

As a Masters of Engineering student at MIT, he returned to the project and wrote his thesis on adding modular user interface components to the Reality Editor.

After his studies, he joined Mozilla to work on their open source platform for home-based IoT for a couple years.

But, the particular magic possible with cutting-edge innovation led him to PTC to return to work within this realm of research. Each time Hobin has stepped away from this research and then returned, he’s done it with fresh eyes and a broader perspective gained from other experiences and pursuits.

“It’s been interesting to see where the research goes without me, but more exciting to be part of it,” he said.


Putting Spatial Analytics on the Map

When Hobin joined the Reality Lab late in 2019, he took over the lead on the “Reality Zone” – research that centers on real-time virtualization of a space through 3D sensors. With Microsoft Azure Kinect cameras, the Reality Zone captures a scan of a space in real-time. This enables a virtualization of a space; not only its physical objects, like machines and walls, but with machine learning, humans and the movement of these things within the space.

With this real-time virtualization, or digital twin, comes multiple streams of data that captures products, materials, people, and the physical space. Over the last year, Hobin made use of the Reality Zone research to create new technology that enables a spatial analysis of the captured data.

In his work, multiple streams of data come together spatially that otherwise would be difficult to combine. The result is a real-time spatial infrastructure that provides intuitive analytics tools for users. The Spatial Analytics technology uses artificial intelligence designed to analyze movements, performance, downtimes, all contextualized in space.

Essentially, the spatial analytics tools help to put problems into context and that allows for a more intuitive understanding for solving problems in the factory workflow. Because his work contextualizes data within space, it makes it possible to easily derive insights in real-time, or over time. While they’re just scratching the surface, spatial analytics can answer questions critical to optimization efforts, such as:

Time-and-motion studies: Traditional scientific management get a real-time, continuous makeover with spatial analytics by understanding time spent on a process, a step in a process, or in a particular zone.

Health and Safety: Always paramount in the workplace, spatial analytics can ensure workers are following safety guidelines. In a dynamic place, like a factory, real-time data, computer vision, past performance data, or a combination of these types of data streams, can be leveraged and analyzed in ways to improve safety for both workers and machines, and the collaboration between the two.

Digital Twins of Places: With both a bird’s eye and detailed view of a factory floor enabled by integrating multiple sets of data, spatial analysis offers visibility into movements, and can make data-driven recommendations on how to improve processes and performance. With the large data set, spatial analytics can begin to develop correlations between disparate data streams that were previously invisible.

Watch this video to see a demonstration of spatial analytics in action:

One of the things that’s critical to Hobin’s research – and the insights he’s developing – is keeping humans at the center of at all.

“It’s important to remember when you’re reducing things to numbers that those numbers are still humans. We have to value human ingenuity and creativity throughout the process,” Hobin said.

For example, ingenuity is enabled through data literacy. “We constantly refine the presentation of our analytics and systems to improve legibility regardless of each viewer’s expertise,” Hobin said. Presenting analytics as human pose data allows people to understand what’s going on because it’s familiar and relatable is just one example.

In terms of creativity, ease of use for any skill level is paramount. In the development of spatial analytics this means allowing people to design processes using a simple drag-and-drop interface.

“It would be easy to unintentionally complicate this interface and make it so that only an expert with days of training could hope to use our tools. I hope that our dedication to accessibility shows through in the wider Spatial Toolbox work with our design, tutorials, and documentation,” Hobin said. “This definitely isn’t the end of the story and I believe it is critical to keep an eye towards removing all unnecessary complexity and obfuscation.”

The vision is to create a transparent system where there is a two-way flow of information between spatial analytics and humans. “Workers are the true experts,” he said. Through creating different “lenses” for all users from the worker doing the work to the floor manager and beyond, he envisions enabling more efficient and optimized collaboration.

At PTC, we’re actively engaged in researching and developing spatial computing and spatial analytics for a variety of industrial use cases. Stay tuned for more ideas and innovations coming out of the PTC Reality Lab. Keep up with the Reality Lab on Twitter: @PTCRealityLab.