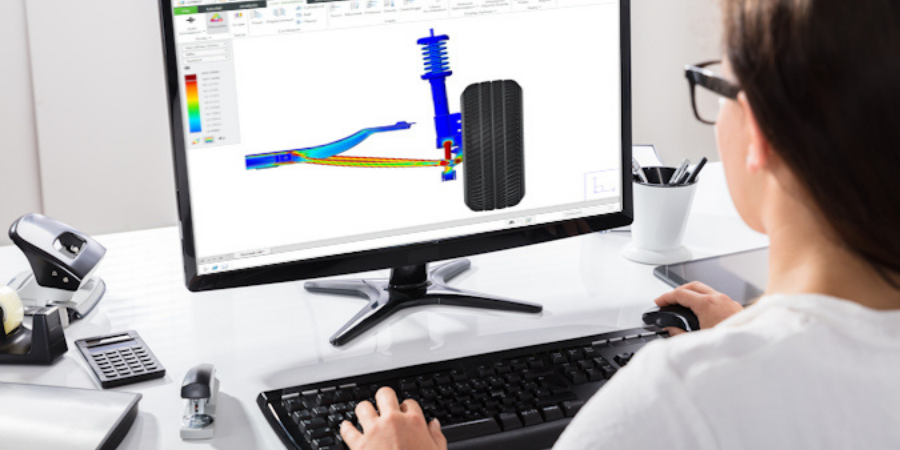 Computer-aided engineering (CAE) is the practice of applying computer-assisted math-based analysis and simulation techniques to the product development process.

CAE combines computer-aided design (CAD) with disciplines such as finite element analysis (FEA), computation fluid dynamics (CFD), multiphysics, and engineering calculations. CAE aims to create products, assemblies, and component parts that are not only validated to survive their operating conditions but also optimized for desired characteristics like weight and strength.

To understand CAE, historical perspective helps. Let’s look at the origins of CAE.

Computers were first applied to product development in the 1950s. Many of these programs aimed to replace drafting boards, protractors, French curves, and electric erasers with software that would simplify creating and modifying 2D production drawings.

Subsequent programs developed a 3D representation of the object to be drafted, called the model. This representation first depicted the wireframe edges; later, the exterior surfaces; and even later, the solids and internal volume. Solid 3D models provided advantages like viewing the product from various orientations, calculating mass properties, and performing interference checks. Computer-aided drafting had evolved to computer-aided design (also CAD).

Prior to computers, analysis for product development had traditionally been performed using two methods: (1) hand calculations of closed-form solutions and (2) empirical data collected in handbooks.

Both have significant disadvantages for complex products. As a structural analyst at Lockheed Martin, I used “Roark’s Formulas for Stress and Strain.” I rarely encountered a real-world situation where I could look up a formula and plug in the numbers. When I was a designer at Boeing, the design and analysis reference manuals were irrelevant for working on new products that differed from existing vehicles.

Parallel with the development of computer-aided drafting and computer-aided design tools, computers were applied to simulation problems like structural, thermal, modal, fluids, mechanism, and multiphysics analysis. Rather than attempt a closed-form, computer models:

When these simulation and analysis tools were used in conjunction with and later incorporated into CAD tools, computer-aided engineering (CAE) had arrived.

Why does CAE matter for product development? Let’s look at three challenges.

Prototypes and Testing. Prior to CAE, organizations relied on manufacturing and testing prototypes to validate designs. This process is expensive and time-consuming. Failures revealed during testing at best involved another cycle of design, prototype, and testing. At worst, it meant starting over.

CAE is not a substitute for prototypes and testing. Instead, CAE provides a high level of confidence that you perform the right tests, and your product should survive its operating environment.

Optimization. Organizations that lack the resources or people to perform CAE compensate by over-engineering their products. They use more durable materials. They increase wall thicknesses, add structural members, and incorporate more fasteners. These methods add weight and cost to the product.

CAE tools allow you to simulate the product or component’s response to load conditions in the operating environment. This allows the engineer to validate the design. Then the product can be optimized by selecting alternate materials, changing model dimensions, and reducing component quantities. CAE tools can find the best possible solution over the design space for mass, volume, stress, temperature, natural frequencies, fluid flow, and other quantities of interest.

These benefits for prototypes and testing, efficiency, and optimization result in reduced development costs, faster time-to-market, and better products that please your customers.

Enhance your product design with simulation and analysis.