From Shipwreck to Shipshape: The Incredible Story of PTC’s Boardroom Table 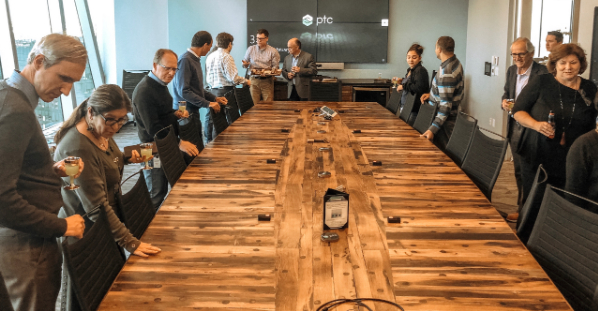 If there’s one phrase to describe PTC’s new global headquarters, it’s this: forward-looking.

We’ve written previously about how digital transformation is built into our own walls and technology is inherent in everything from the desks to the lights to the very shape of the building.

However, on the 16th floor, there’s a special piece that connects the building to the past – an incredible 22-foot boardroom table made from wood salvaged from the “Seaport Shipwreck.”

Here’s a bit of the backstory: During the construction of 121 Seaport – which is now PTC’s new global headquarters – Skanska, the developer of the property, uncovered something unexpected: the remains of a two-masted schooner dating back to the 19th century.

Preserved deep in the mud of the former South Boston Flats – this area was filled in the late 1800s – the ship’s wooden hull was in surprisingly good condition. When the discovery was made, Skanska stopped work in the area to allow for archaeological documentation.

While questions remain about the ship, it’s estimated it was around 100 years old around the time it was shipwrecked. The archaeologists know it was carrying barrels of lime, which was an important component in mortar at the time. They believe the lime cargo, which is flammable when exposed to water, caused a fire and the ship was towed to the flats and left there to burn. The stern (rear) of the ship burned completely.

(For more about the Seaport Shipwreck, the City of Boston has a webpage dedicated to its history.)

Transformation: From Shipwreck to Shipshape

After the archaeologists completed their excavation and analysis, Skanska partnered with John Dickey and his company Timberguy to give the shipwreck new life.

Over the past decade, Dickey has carved out a niche as someone who transforms salvaged wood into beautiful pieces of furniture for residential and commercial settings. He’s done projects for clients all over Boston and worked with all types of wood, but this project was particularly special.

“It’s been an honor, a privilege, to be able to work with this wood. When I saw the story about the shipwreck’s discovery on the news, I said to myself, ‘I’ve got to get a piece of that.’”
He took ownership of the entirety of the timber from the wreck, which included about one-third of the hull, some of the futtocks, and the keel.

Dickey recently came as an invited guest to PTC’s weekly social event, which included a tour of the executive suite with the boardroom table playing a starring role. He brought several artifacts from the ship and employees were able to get an up-close look. 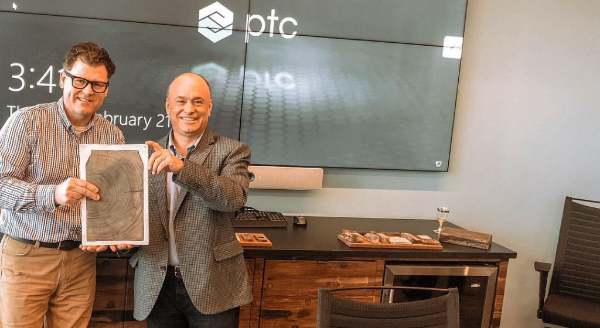 PTC President & CEO Jim Heppelmann (right) with John Dickey, Timberguy owner and craftsman, show off an cross-section of wood from the Seaport Shipwreck.

There’s only one way to describe the wood’s condition when it was first removed from the earth, Dickey says: “a hulking mass.”

“It was wet, muddy, stuck together,” Dickey describes. “It wasn’t neat.”

He and his team spent hours upon hours carefully dissecting the “wood blob” with special tools. Making it even more challenging was the unique construction of the ship, which included diamond-shaped wooden pegs. These were still intact – a credit to the craftsmen and shipbuilding construction of the time. 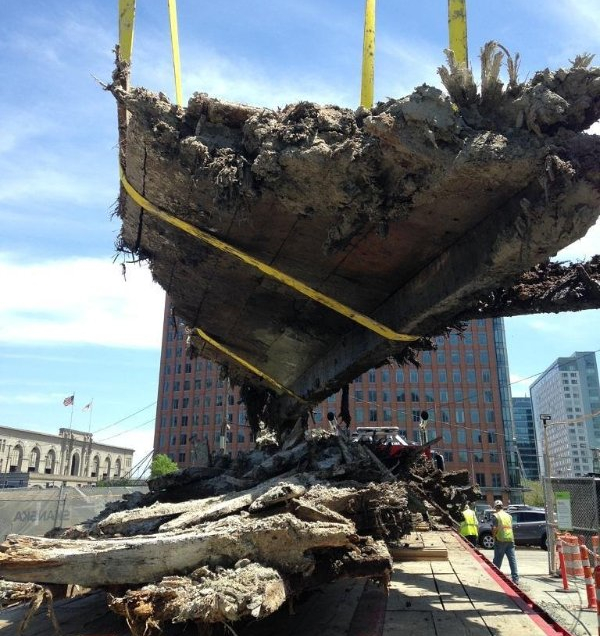 Underneath all that muck was wood in surprisingly good condition given its age. “It was protected for the last 100 or so years (after the area was filled in), away from tidal effects, oxygen, not even bugs or worms got into this wood.”

As a result, working with this shipwrecked wood has been a “carpenter’s playland,” Dickey says. Not only was the wood in excellent condition, but it’s incredibly high-quality, old-growth wood.

“Old-growth wood has such character, more strength – it’s beautiful. It’s a heavy, dense wood,” he says, adding there is a bonus that this wood didn’t end up rotting in a landfill.
Dickey worked closely with Cresa and Dianne Dunnell of Margulies Perruzzi Architects, who provided the vision and design of the boardroom table. MPA served as the interior design firm for the PTC’s headquarters.

Great care was taken in choosing the right pieces of wood – all solid oak – to be incorporated into the table. The boardroom table incorporates two sources of wood from the shipwreck. The outside perimeter of the table utilizes the ship’s futtock material (the ribs that run inside of the boat) and the center piece section of the table “features” original hull planks from the shipwreck. To pay homage to the material, the table was crafted in a shape that’s reminiscent of a ship. The solid construction hides all the technology required for a 21st century global business.

It has a great shape, wonderful dimensions,” Dickey said. To complete the boardroom’s furnishings, he also crafted a credenza to coordinate with the table – a modern cabinet with refrigerator and A/V equipment.

Experience the Shipwreck in Augmented Reality

In the public walkway between 121 Seaport and 101 Seaport, Skanska created an open-air museum highlighting local history and the Seaport shipwreck. In addition to sculptures, visitors can download the Harbor Way app on a smartphone to get an immersive augmented reality experience powered by Vuforia.

Creo
The Product Design Renaissance: 9 CAD Technologies to Incorporate Now
Learn about 9 CAD advancements that are ushering in the renaissance of...
CAD Connected Devices Augmented Reality Additive Manufacturing Digital Transformation Generative Design Model Based Definition Simulation
Thingworx
How to Unlock Value on the Manufacturing Floor by Digitizing Your Cont...
Bottleneck and improvement analysis are the keys to increasing efficie...
Industrial Internet of Things
3 Actions for Sustainable Manufacturing in 2023
Being sustainable in manufacturing means incorporating it into every d...
CAD Industrial Internet of Things PLM Digital Transformation Sustainability