Assigning an appearance to an assembly helps you visualize the finished product. So, what happens when you have appearance variations? With Creo 4.0, now you can assign “appearance states” to those variations. You can even link them to assembly combined views. Here’s how:

Appearance states are saved in the View Manager.

To open this dialog, click View Manager in the graphics toolbar.

You can’t change the Master Appearance; its purpose is to clear appearances. However, you can change the default. Just follow these steps: 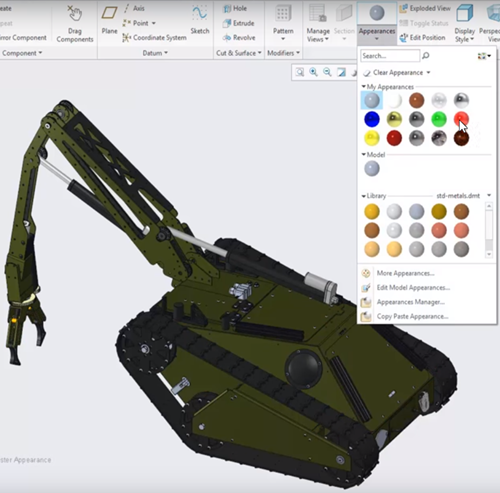 Selecting an appearance in the palette.

The system saves the changes to the active appearance. In this example, the Default Appearance is active, so that’s where the change is saved.

From the Appearance tab in the View Manager dialog, click New to create a new appearance.

A new appearance is created and it becomes the active appearance. Now you can follow the same steps as we did to change Default Appearance.

Use Default Appearance of an Assembly

Right-click Master Appearance in the View Manager and select Activate. The default appearance of the assembly is now used.

You can see a brief demo of these tips in the video below.

Get More Product Design and Development Tips in Your Mailbox

Keep in touch with all things CAD. Subscribe to our newsletter and get more tips, news, insights, and product reviews. Subscribe now!

Aaron Shaw joined PTC in 2013, currently he is the Senior Manager, CAD Demand Generation. He is responsible for the CAD marketing strategy and execution worldwide. He enjoys playing golf, eating spicy foods, reading, traveling, and rooting for all Boston teams. Aaron is a graduate of Penn State, you can follow him on Twitter @AaronEShaw.