Parametric vs. Direct Modeling: Which Side Are You On?

Engineers have long debated the virtues of direct vs. parametric modeling. Some like the freedom and flexibility of direct modeling, while others prefer the feature definition and dimension control capabilities associated with parametric systems. Read on to learn more about both methodologies to determine which is right for the work you do.

What Is Parametric Modeling?

Parametric modeling is an approach to 3D CAD in which you capture design intent using features and constraints, and this allows users to automate repetitive changes, such as those found in families of product parts.

What Is Direct Modeling?

Direct modeling empowers you to define and capture geometry quickly, without spending time worrying about features, constraints, and original design intent. It is often compared to working with modeling clay. Simply push and pull the geometry until you arrive at the shape you want.

Pros and Cons of Direct vs. Parametric Modeling

So which is better, direct or parametric modeling? The answer is “all of the above.” While each has its benefits, the best CAD software uses both approaches to modeling. Manufacturers that integrate direct modeling into their parametric environment report greater speed, quality, and focus on innovation that helps them stay ahead of the competition.

But before we talk about that, let’s weigh some of the pros and cons of direct vs. parametric modeling.

How is Parametric Modeling Used?

Parametric modeling technologies are used for design tasks that involve exacting requirements and manufacturing criteria. For example, organizations often turn to parametric when making families of products that include slight variations on a core design, because the designer will need to create design intent between dimensions, parts, and assemblies. This supports designs that will need to be modified or iterated on a regular basis. It also creates models with individual features that can be modified or changed—such as holes and chambers—that are captured in a ‘model tree.’ 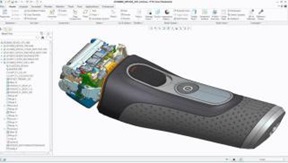 Champions of parametric modeling enjoy benefits that include:

But parametric technology is not without its drawbacks. Some of the cons associated with parametric modeling include the following:

When is Direct Modeling Used?

Direct modeling creates geometry rather than features, so it supports a conceptual effort where the designer doesn’t want to be tied down with features, their inter-dependencies, and the impact that making a change might have on features.

“Each approach, parametric or direct, has its uses, and perhaps the perfect CAD strategy incorporates both,” CAD software industry analyst and president/founder of The Schnitger Corporation, Monica Schnitger, said. “It might make sense to use direct modeling during conceptual thinking, when you need to quickly manipulate the design and don’t want to be slowed down by working within pre-defined rules. During detailed design, when most of the free thinking and exploring is finished, it might be reasonable to use parametric design to ensure that future iterations don’t violate the original concept.”

The Best Systems Use Both Direct and Parametric Modeling

The bottom line is that you need both direct and parametric modeling to deal with the complexity of today’s product designs. Companies like cellphone case makers, digital imaging companies, and printed circuit board manufacturers use both approaches. PTC Creo, a full-featured CAD modeling tool, includes parametric and direct modeling capabilities in one environment, working on one model. You can read more about the benefits of each approach in Part 2 of this series: Best Approach to 3D Modeling: Parametric, Direct, or All of the Above.

Keep Up With Creo

Subscribe to the PTC Express newsletter for monthly CAD updates.