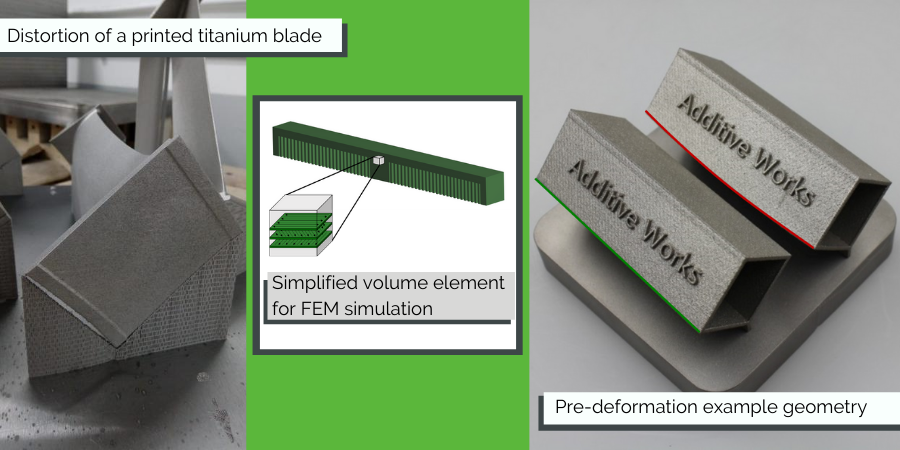 Additive manufacturing (a.k.a. 3D printing) gives you a great deal of flexibility as you design and optimize parts. You might initially think of flexible polymer parts when you think of the 3D printing process. However, the kind of objects you typically produce with a 3D printer (think prototypes, one-offs, short run productions, or shapes that don’t lend themselves to traditional manufacturing) may be better suited to stronger, more heat-resistant materials—metals.

The metal additive manufacturing (AM) process is one of the most promising additive methods. It can result in highly dense and complex parts made from metal powder. The process itself is like welding where powder is heated to melting temperature and solidified as it cools, forming the part. Since heating and cooling rates are high due to the small size of the weld paths, the thermo-mechanics (temperature gradient effect) becomes relevant and effects like those in welding can be observed.

The main effect is the contraction on cool-down and the formation of plastic strain due to the strong temperature gradients. This causes deformation, as well as residual stresses. Due to the continuums-mechanics, the manufactured part geometry determines where plastic strain, deformation, and stresses occur. Especially, in large structures, the accumulation of the contraction leads to high forces that can deform or damage the shape significantly.

Although the solidification process and thermo-mechanics of metal AM are very complex in detail, the mentioned effects that, for example, result in distortion can be simulated on a macroscopic level by using suitable methods from welding simulation.

Assuming that the process is just a normal welding process, but with a very long weld path (the part fully consists of weld paths), the ‘inherent strain method’ can be applied. This can reduce the thermo-mechanical model to a static simulation that can easily be solved by mechanical Finite-Element-Method (FEM).

To further reduce the complexity of the calculation, it can be assumed that the process is thermally stable. This means that the ambient (part) temperature doesn’t rise, and resulting material is homogeneous and isotropic in average. For most materials and jobs, this is given due to the right selection of process parameters. Thanks to this, and by making use of further process characteristics, it’s possible to use finite element meshes that are much coarser than the actual resolution of the process.

Furthermore, fewer layers results in reduced calculation time since fewer steps need to be calculated. In principle, one calculation step includes the addition of the n-th finite element layer and application of an effective volume contraction. The continuums-mechanical equilibrium is evolving with the layers. This is not only because of the applied strain, but because the geometry itself is changing with the layers. This effect can explain most microscopical defects and distortion of additively manufactured metal parts.

Displacement is easy to interpret as it’s the actual physical movement of the body. It can be used to check for tolerances and proof the design and job preparation before manufacturing. However, if displacement can be accurately predicted, this information can be used as a feedback, and also to compensate the distortion by virtually pre-bending the part. Furthermore, the z-deviation of the topmost layer can be investigated, allowing you to see if recoating of the new layer may fail due to a crash of the blade into the up-bending part.

Of course, it’s always interesting to see how (residual) stress is distributed within the part since this is dependent on the part geometry. The stress redistribution that occurs when the part is removed from the baseplate is an interesting phenomenon that can be understood and investigated by simulation.

In regions where Von Mises stress is equal to the yield stress of the material, plastic strain occurs. The plastic strain, and its norm as a scalar value, shows the irreversible strain and is a good indicator for damage of the material and risk for failure. By comparing it with an elongation-at-break criterium, it can be used to predict critical regions in terms of cracking or delamination. In particular, unwanted separation of support structures during the process can be predicted and countered before the actual manufacturing job begins.

Since the continuums-mechanics are responsible for the strength of effects, the behavior of a component differs if the job preparation changes. The build direction, as well as the support structure have a massive influence on the part geometry itself. Thus, they can be used to optimize mechanical conditions during manufacturing.

To benefit from simulation and improve quality and/or reduce build failures, you need to identify the right use case. Although all parts and materials show the same behavior during the simulation process, the strength of effects differ based on the material and the geometry and the size of the part.

Generally, the bigger the part, the more the job is likely to fail and the part to distort. Thus, for large structures, it’s beneficial to run a simulation before manufacturing starts. Especially due to the high costs associated with creating large structures.

Although it’s possible to solve manufacturing problems by finding the best orientation, having optimal support structures and a nice design for AM, distortion issues cannot always be avoided. Even heat-treatment cannot reduce the contraction that occurs during the process. To avoid high deviations on large or think structures, the method of “pre-deformation” can be applied. Based on the simulated displacements, the geometry is modified in a way, that contraction during the process leads to an accurate part. This step then becomes an additional part of the digital job preparation workflow.

In this job preparation chain, simulation itself is an input for the generation of the build job. Components, that could not be realized before due to distortion issues, can now easily and accurately printed by using this simulation-based workflow.

For metal 3D Printing simulation, the Amphyon for Creo Plugin by Additive Works was released for Creo 7.0. Simulations can be conducted as part of the print preparation within the tray and pre-deformed models will automatically replace the originals for near-net-shape additive manufacturing.