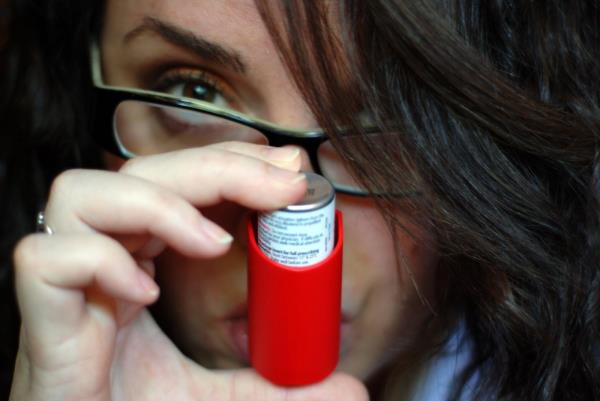 Asthma is a lifelong chronic illness that can’t be cured, only controlled. Control involves avoiding triggers (things in the environment that set off asthma attacks, such as pollen or smoke), long-term, or control, medicines that prevent airway inflammation, and short-term, or rescue, medicines to stop attacks that can lead to emergency room visits or even death. A wide range of medications (most also used for a related respiratory illness, COPD) are administered to the lungs and air pathways through an inhaler, a device that provides a measured, aerosolized dose of the drug.

It’s often not clear what causes an attack—symptoms may show up from half an hour to eight hours after encountering a trigger. People who neglect their control medication end up using their rescue inhalers too often, risking a loss of effectiveness. A trend in greater rescue inhaler use over time might not be consciously noticed by the patient.

But an increasing number of inhalers now carry clip-on sensors to monitor usage, location, and other variables, bringing lungs and air pathways into the Internet of Things. Patients, physicians, and public health officials can get a better picture of both individual cases and asthma incidence overall.

Anatomy of a smart inhaler

All smart inhalers are currently sensors that clip on to existing inhalers. They track when puffs are taken, and where, via GPS. They communicate to an app on a smartphone, or, for patients without smartphones, to a plug-in hub. They are used as part of an asthma management program, under a physician’s supervision.

Even the best medication is ineffective if you don’t take it
Asthma can’t be cured, only controlled. Regular use of a control inhaler and sparing use of a rescue inhaler both take time, care, and thought. Patients often skip doses of control medication.

How often? Under what circumstances? Information on medication use can be surprisingly spare, and people tend to remember more diligent devotion to self-care than is actually the case.

A sensor that can detect the time and frequency of inhaler use can provide a wealth of data, and be used as a basis for improving adherence. This will minimize emergency room visits, which can result in hospital admissions and even death. Analytics can predict an oncoming acute episode and allow for intervention before it starts. This reduces both risks and healthcare costs.

An inhaler sensor is equipped with GPS, so it knows when and where you take a rescue puff. Over time, a pattern of use is developed, without any need of personal diaries or other conscious entry of information. Do your attacks happen in a certain area of town? A certain room in your house? On a certain day, after vacuuming?

It also prompts, via your smartphone, for more information. This puts the triggers top of mind, and also may lead to an understanding of when to take a prophylactic puff of rescue medication, or how to avoid a trigger entirely.

Propeller Health, a smart inhaler manufacturer, partnered with the Weather Channel to monitor air quality in Louisville, Kentucky and with the city itself to give out free sensors to city residents with asthma, in a program called AIR Louisville. They handed out one sensor for rescue inhalers, and the other for maintenance inhalers. The time and location data for each use is correlated with a wide range of environmental, geographic, traffic, and neighborhood data, and is providing maps of asthma attack incidence.

How the IoT helps doctors and patients communicate

Technology in healthcare is most useful not when it replaces the relationship between physician and patient, but when it reinforces it.

Having access to the inhaler usage data enables physicians to base a discussion on actual usage, and focus on behavior changes, possible triggers, and obstacles to adherence. Over time, the physician can also see which interventions are most effective with the particular patient, and which the patient ignores.

There are, of course privacy and security concerns with such close monitoring, and different patients will have different thresholds, which will need to be taken into account.

The players, and the market

Allied Market Research expects the smart inhaler market, below $6 million in 2015, to read $191 million globally by 2022, an average annual growth rate of over 60 percent. No wonder there is a lot of interest.

All four big pharma companies with significant asthma or COPD portfolios (GlaxoSmithKline, AstraZeneca, Boehringer-Ingelheim, and Novartis), are partnering with technology companies, including Propeller Health, Adherium, and Qualcomm Life, to develop smart inhalers. Teva, a generic pharma company, went farther, and actually bought MIT spinoff Gecko Health. Teva and generic manufacturer Vectura, which has a deal with Propeller, show how quickly generic competition can show up in a potentially lucrative market.

Novartis, working with Qualcomm, is developing an inhaler with an integrated sensor, aiming for a 2019 launch.

Creo
What's Next in CAD? Our Top 5 CAD Trends in 2023
Learn 5 CAD trends PTC is expecting to see in 2023. Learn why PTC Creo...
CAD Additive Manufacturing Digital Thread Generative Design Simulation
Thingworx
How to Unlock Value on the Manufacturing Floor by Digitizing Your Cont...
Bottleneck and improvement analysis are the keys to increasing efficie...
Industrial Internet of Things
3 Actions for Sustainable Manufacturing in 2023
Being sustainable in manufacturing means incorporating it into every d...
CAD Industrial Internet of Things PLM Digital Transformation Sustainability