When Google Glass was first launched two years ago, Google took the strategic approach of most modern tech phenomena: penetrate the consumer base and enterprise will be forced to follow. But with a lack of compelling content, poor battery life, and some unexpected cultural resistance (remember the ‘Glassholes’ of Silicon Valley?), the product flopped. In early 2015, Google sent Glass the way of The Terminator, declaring “I’ll be back.”

This week, Glass fulfilled its promise to return and was re-launched with Glass Enterprise Edition. Support for prescription lenses, a better battery, and more processing power mark the product’s hardware improvements, but Google’s shift in go-to-market approach is the real story. Google announced they’re ready to move forward and will pursue an enterprise-first approach for the product, but why?

Not surprisingly, industry research finds that the adoption of AR in the enterprise hinges on three core drivers: business need, device availability, and content accessibility. With two of the three pieces in place, Google is demonstrating readiness to fill the gap and complete the picture. 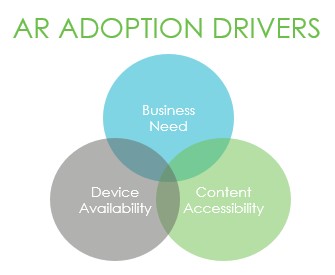 Business Need: Digital transformation initiatives are maturing, and companies have evolved their IT infrastructure to enable rapid adoption of new technology. Gone are the days where successful companies fear technology innovation – those who did have not survived. In 1958, corporations listed in the S&P 500 had an average stay of 61 years. By 1980, numbers from research firm Innosight reveal the average stay declined sharply to 25 years, and in 2011, the average tenure dropped to 18 years. With AR pilots and studies showing massive gains in productivity like GE’s Wind Turbine Assembly showing 34% increased productivity on first use, the business opportunity is clear and anxiously waiting to be filled.

Content Accessibility: With the wealth of information available through the IoT and the resulting digital information captured and stored by maturing digitization of business processes, companies now recognize that data is their biggest asset. While automation capitalizes on some of this value, companies are eager to get data into the hands of their human workers to act on it and derive value. PTC, with its Vuforia technology, and others have been fine tuning content development tools and platforms for some time. Now many others are getting into the space. Apple released its ARKit at the Worldwide Developer Conference in May, which is the software kit that turns their developers loose building the types of AR apps that can run on phones/tablets today, but would run on head-mounted displays tomorrow.

Device Availability: While AR can run on phones and tablets today, for many use cases the killer AR experiences happen on wearable head-mounted displays. Microsoft, Apple, Google, and others are all making big bets here. Google was first with Google Glass, but it was rushed to market and wasn’t ready for business or consumer use. Google is reprising Glass, perhaps as a placeholder while other bets mature, including glasses forthcoming from Magic Leap or from devices already in the Android ecosystem from companies like ODG and Vuzix. There is definitely a battle of the titans brewing, and the reason they are all moving so aggressively is because they know that head-mounted displays will ultimately disrupt the phone/tablet market as we know it today.

In a rare turn of technology evolution, devices are last to the party – quickly solving the final technical challenges in ergonomics, technical capabilities, and computer vision and mapping. With the profound investment taking place within the hardware community, it is clear the question is no longer if, but when the final piece of the puzzle will fall into place. With Google’s latest news about Glass, the future of AR is bigger, brighter, and closer than many may have anticipated.