10 Best Places to Be a CAD Designer

Study ranks US cities for wages, cost of living

Are you a CAD designer in Michigan? You’ve got company. Detroit, MI is currently the hottest market for CAD designers according to a top 10 ranking of cities to live in for the profession.

The official ranking, released by IT and engineering recruitment experts, Modis, was topped by two Michigan cities, with Detroit leading the rankings and Niles coming in second. 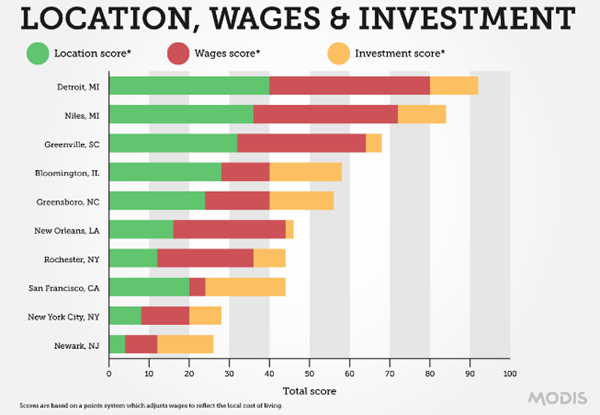 Michigan comes in first – and second –for the 10 best cities for CAD designers in the U.S. Source: Modis

Cities on the list were ranked using a number of factors, including the concentration of jobs in the area, the average wage of the profession in each city, and the level of investment in tech talent in their state.

Three of the top five cities have a population under 100,000, and although a few large cities did make it into the top 10 (New York, NY, San Francisco, CA, and New Orleans, LA), they lost some points due to their inflated cost of living. The rankings also revealed:

“It’s a good time to be a CAD designer,” said Matthew Ripaldi, senior vice president at Modis. “Over the next few years, we’re anticipating job creation above the national average in both the IT and engineering industries, so highly skilled talent, like CAD designers, are positioned to take advantage of competitive opportunities. Our current best cities ranking is a great starting point for today’s CAD job seekers, and we look forward to seeing continued demand for this niche across the country.” 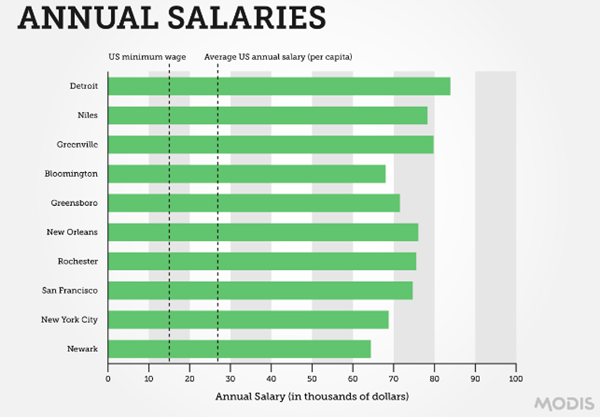 For the full results and more information visit the Modis blog here.

Get the Latest Product Design and Development Stories in Your Mailbox

Want to keep in touch with all things CAD? Subscribe to our newsletter and get more tips, news, insights, and product reviews. Subscribe now!