Augmented reality has been both a promise and a challenge for decades.  The appeal isn’t hard to see.  The power to create and interact within an artificial 3D environment, where sensory variables can be changed and managed opens unimaginable doors to human curiosity and ideas.  But over the years, similar tools have nearly all failed to live up to the dreams that inspired them. 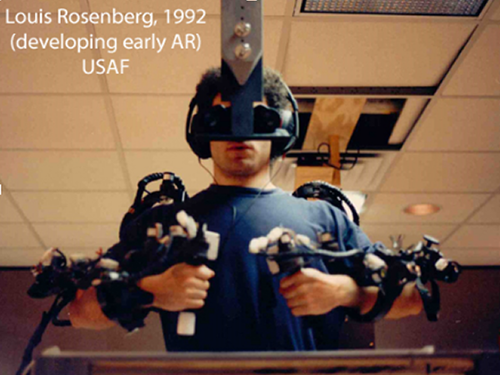 Louis Rosenberg testing Virtual Fixtures, one of the first Augmented Reality systems ever developed (1992). Note that 3D graphics were still slow in the early 1990s, so Virtual Fixtures enlisted robots, controlled by a full upper-body exoskeleton worn by the user. Image: WCS100

That is changing now.  Computing and network power has finally grown to make realistic AR not only possible, but economically feasible as well.


Recently PTC announced its support for one such innovation: the Microsoft Hololens, an AR visor designed to superimpose 3D-projected imagery over visible real space, as well as communicate position and action data to other networked Hololens visors.  This will help 3D CAD engineers collaborate their 3D designs in a cooperative, real-time virtual space. 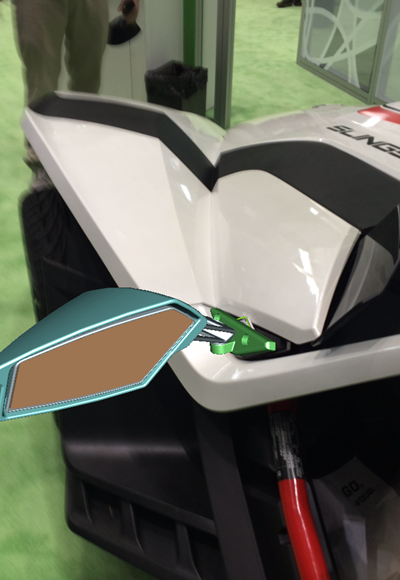 A virtual wing mirror appears positioned on a real-world Polaris Slingshot vehicle. With AR, product designers and even non-technical stakeholders can examine the fit of digital object before sending models to prototyping.


That would be amazing enough by itself.  However, recent advances in AR technology are happening simultaneously with another major leap forward in technology: the Internet of Things.


Imagine a product design environment in which your design exists as a fully realized 3D object, projected virtually in the space before you, and is constantly fed and informed by a steady stream of operational data being generated by its physical counterpart in the real world.  Your product’s virtual avatar operates and behaves exactly as the physical version does.  And your team can tinker, adjust, redesign, and experiment with new design approaches in a common virtualized environment.


That is what augmented reality systems, such as the Hololens, mean for the future of 3D CAD product design: the creation of a closed loop, the digital and physical permanently intertwined into a single evolving product.


Augmented reality is the future of 3D CAD, and the future is closer to the present than you may think.

Where is product design going next?

Are you prepared for what lies ahead for the product design industry? Get expert insights from some foremost thinkers and start embracing the change. Download our free guide today.