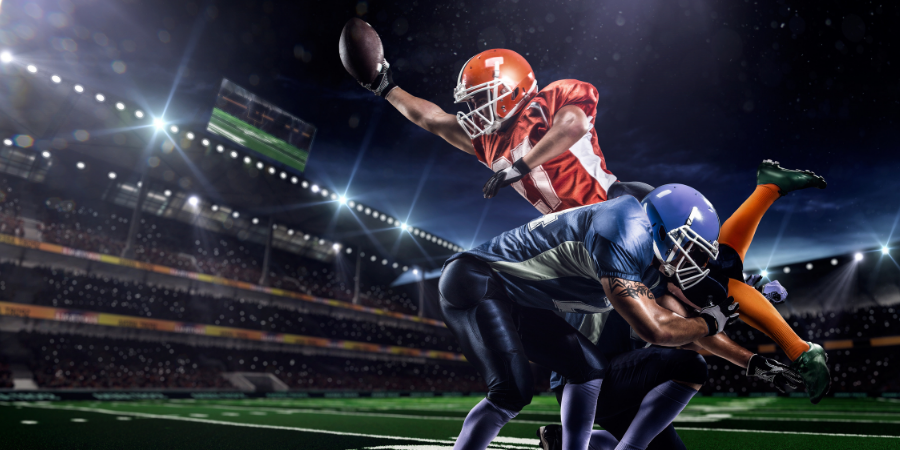 What Is a Simplified Representation?

A simplified representation is a lightweight version of a model, with some of the details removed so you can quickly build various assembly configurations.

You can have as many of simplified reps associated with your assembly model as you want. Not only do they speed up regeneration and display time, they also allow you to focus on models that are relevant to what you are currently working on within your assembly.

A representation is created with an overarching rule. For example, you might create a simplified rep with a rule that excludes or includes all components by default, and then you might identify models within the assembly that you don’t want to follow that default setting.

Simplified reps are powerful when it comes to managing large assemblies. However, they can become cumbersome as more components are added to your assembly. You might need to revisit some of those simplified representations to determine if new components should follow the default rule you defined or go against that default rule. Or you might opt to create additional rules for the representations to follow—rules that will be followed automatically and predictably as your design matures.

Populating a Stadium with Simplified Reps

In my example, I’m going to simplify an assembly of football fans in a stadium. The simplified reps will allow me to look at various configurations of my stadium assembly by turning components (i.e., people) off and on, based on various parameters embedded in those models, as well as the components’ locations within the stadium.

In the image below, I used simplification to create a very lightweight Ohio State fan (go Buckeyes!). Many details are missing, but it’s all I need for this project. [How to Create a Simplified Rep in Creo.] 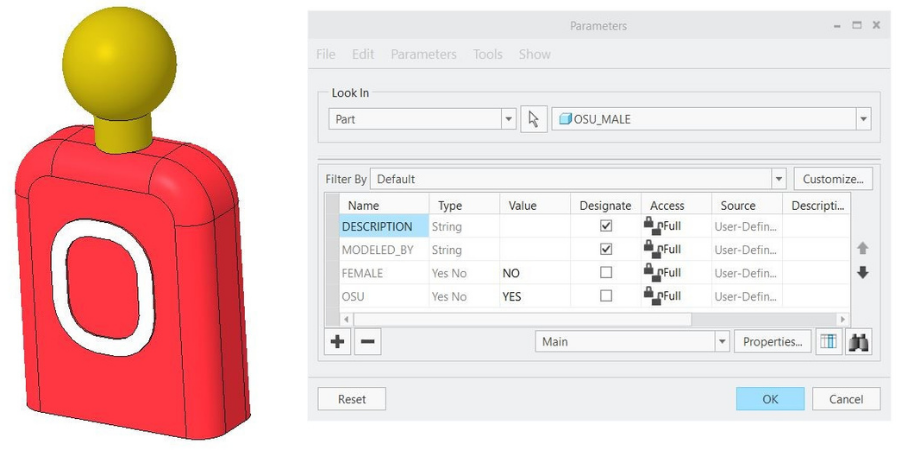 Logic for Adding Fans to the Stadium

Not all fans are the same. So, I created fans that were female and male for each team. Then I added some information to each model that will help me build smart simplified reps:

For even more flexibility, I further:

Now I’ll apply rules for my simplified rep. [How to Create Rules for Simplified Reps.]

The defined rules of this assembly will always be enforced, regardless of what happens over the course of the product development process. This ensures results are repeatable and reflect the captured design intent. Here are some possible assembly configuration rules for the stadium: 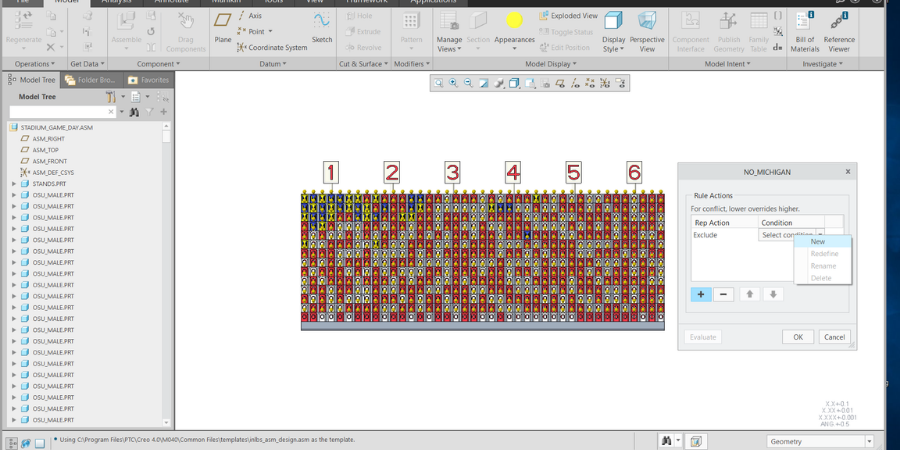 Continued development involves bringing more fans into the stadium. I could even place the band on the field. Regardless of what is added to the assembly, the new components (people) continue to follow the same rules as before. FEMALE fans show up when they’re supposed to show up, Buckeye fans in the band (which should be all of them) will be included in configurations that were built to display all Buckeye fans, and so on.

Applying Reps and Rules to Your Assemblies

You can use simplified reps with rules for many professional scenarios—for example, designing a bridge or a piece of industrial equipment. Imagine a company producing a cruise ship. You could use parts classifications to show/hide all the ship’s electrical systems using a set of rules like those that I applied to the fans in the stadium.

In the same manner, components from Deck 4 of the ship could be isolated using rules. So, rather than manually adding or removing components as the design matures, rules make those changes automatic.

In the case of the industrial equipment, classifying components in the same way would make it easy to generate a Bill of Materials (BOM) showing all hydraulic components, or just electrical components. It would be just as easy to generate a list of components that will be manufactured, as well as a list of components that will be purchased.
Bottom line? Taking a few minutes to embed some information into your models and writing some rules for your assembly to follow can pay huge dividends down the road.

Get More CAD Know How

For more tips, insights, and updates on CAD software, subscribe to PTC Express, our monthly newsletter featuring the best of the Creo and PTC Mathcad blogs.

Tom McGuire has been using PTC’s 3D modeling solutions since 1993 when he was a mechanical engineer for the US Navy. In 1995 he started a two-year stint at PTC’s Cleveland office as a Senior Applications Engineer, responsible for product demonstrations, benchmarks, and end-user support for a wide range of area customers. Since leaving PTC in 1997 Tom has been providing training, process design and implementation, and modeling services to the FA&D sector, as well as several commercial customers seeking to maximize the return on their PTC software investment. Tom has also shared his knowledge by presenting, on several occasions, at national and local users group conferences.

Tom is currently assisting BAE Systems with their initiatives to extend the reach of their Creo models into the areas of MBD, MBE, MBSE, and AR. Tom can be contacted at tom@3dtrainingcamp.com or by visiting www.3DTrainingCamp.com.