The Splintering Needs of Engineering Simulation

A couple weeks ago, I found myself in an interesting conversation. I was talking with a software executive who was considering starting up a new software company in the simulation space. His most basic question was “where is the greatest need in simulation today?”

I’ll be frank; I struggled to answer. Not because all of simulation’s problems have been solved. Far from it. But it was difficult because the answer varies so widely depending on the ‘who’ and the ‘what’ of it. The needs of simulation users in different phases of the design cycle have diverged significantly. Let me explain. 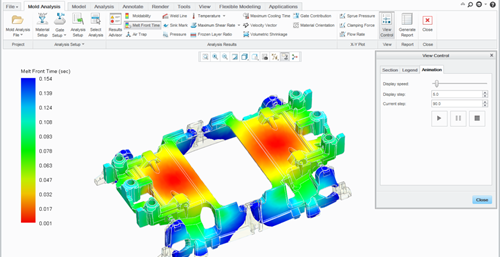 Using simulation, engineers can optimize designs long before production for objects like this mold.

Before development projects are officially funded, organizations assess and compare many different possible candidates for new products. The same holds true early in detailed design, when engineers iterate and explore different shapes for key components. The key in both scenarios is to understand the design space so the best selection can be made.

This translates into specific critical capabilities. Concept geometry tends to be simplistic and representative, perhaps even in 2D. So integration into fully detailed 3D models with CAD isn’t as important. Automated simulation iteration, such as design of experiments, maps out the performance in the design space. Lastly, topology optimization, which suggests new shapes for consideration, is highly applicable.

In this stage of design, there are two objectives. Users want to compare and contrast slightly different variations of a design, allowing them to pick the right branch of the design decision tree. They also need to dimensionally size geometric traits of a design.

From a simulation capabilities perspective, these users need a few important capabilities. Tight integration with 3D modeling is critical. So is direct modeling to assist in simplification and abstraction. Parametric optimization and sensitivities allow users to hone in on the right size of the component by finding the right balance between design criteria, such as weight, performance goals, and maximum stress that leads to failures.

Simulation in Validation and Verification

Here, the goal is crystal clear: Don’t let a design move forward that will fail in prototyping and test. For the organization, this is a critical step to avoiding delay in releasing designs to manufacturing . It also avoids the cost of building new prototypes and paying for testing iterations. Furthermore, this task typically falls to the simulation analyst group, which has an extremely long queue of simulation work.

For this phase, accuracy of the simulation tends to rise to the top of the list. This translates to a combination of capturing best practices and solver tuning. It is critical to take multi-physics into account as combined phenomena across structural, dynamics, thermal, excitation, fatigue, chemical and more can easily account for failures. For example, thermal expansion can directly impact the structural performance components. Chemical reactions affect the fluid dynamics behavior of fluids flowing through pumps and valves. Lastly, a point often overlooked is that simulation automation is very important. Because there is such a long queue of work for simulation analysts, they need tools to help them get their work done more quickly so they can expand their bandwidth.

See why this wasn’t such an easy question to answer?

There are challenges related to simulation up and down the design process. And there are emerging technologies that are beginning to address them. But if you are looking to improve the effectiveness of simulation in design, whether you are an engineering leader or prospective software CEO, there are widely varying problems that can be addressed. Each needs very different solutions.

In concept design, the emphasis is on exploring performance variation in the design space. Tight integration with 3D modeling isn’t as critical, but simulation automation and topology optimization is beneficial.

In detailed design, the need is to compare the performance between slight variants as well as size components. Tight integration with CAD and direct modeling is crucial. Parametric optimization and sensitivities are highly useful.

In verification and validation, the key is to avoid prototyping and testing failures. Simulation accuracy and multi-physics rule the needs of users here. Simulation automation is advantageous in that it expands the bandwidth of simulation analysts with deep queues of work.

Well, there’s my take. Ready to sound off? Do you see the needs of users in these different phases of design differently? How so? Furthermore, what other simulation capabilities do you think would make an impact in each of these areas? I’m looking forward to your thoughts.

This blog post has been licensed for hosting by PTC. The concepts, ideas and positions of this post have been developed independently by Industry Analyst Chad Jackson of Lifecycle Insights.

Chad Jackson is an analyst, researcher and blogger providing insights on technologies used to enable engineers. As a prolific writer, he has published educational thought leadership topics hundreds of times. As a sought-after speaker, he has presented dozens of times both domestically and internationally. As an astute researcher, he has surveyed thousands of engineering organizations as part of his research studies. As a commonsense co-host of numerous web shows, he has debated and pushed limits on critical issues. Overall, Chad is an influential, independent and insightful voice on technologies used to design products.