IIoT Data Processing Increasing at the Edge and in the Cloud 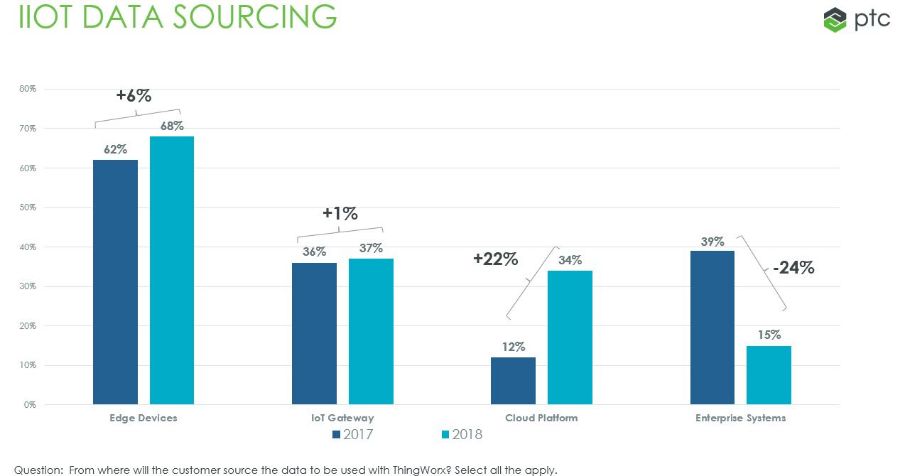 There is no escaping the massive IoT data forecast headlines; IDC predicts there will be 90 zettabytes of data created from IoT devices by 2025. The conversation is evolving away from how much IoT data (we know there will be a lot) and toward the lifecycle of the data as it is processed, sourced, stored and analyzed.

The 2019 State of Industrial Internet of Things report examines these trends in IIoT workload execution venues. Let's further unpack the areas where IIoT data is sourced.

The term ‘edge computing’ is arguably as misconstrued as ‘IoT’ across the marketplace as it means different things to different people, organizations, and industries.

It typically applies to some element of processing, sensing, and actuating commands to monitor, control, and optimize certain functions at the point of origin with computation at the sensor or device-level and up-through other on-site infrastructure (server closet, gateway etc.)

It could be a smart meter on an electric grid, a sensor on a remote oil rig, a CNC machine in an automotive factory or even the PLC controlling it and other machines in an assembly line.

Cited by the majority (68%) of State of IIoT survey respondents, data sourcing at the edge is becoming a fundamental requirement for IoT deployments, especially in heavy-industrial environments with mission-critical applications. Edge processing is crucial for optimizing industrial-grade sensors, controllers, machines or other edge nodes with limited bandwidth, power, access to connectivity, or timely latency requirements. 451 Research reports nearly identical adoption numbers with around two-thirds of IoT workloads being initially analyzed at the edge.

The (IoT) Gateway to Black-Boxed Data

IIoT gateways usually come in the same conversation as the edge, but importantly provide the necessary bi-directional communication to other sourcing venues, as well as enables and manages different forms of connectivity and devices. Industrial-grade IoT connectivity is still a necessity in most heavy-industrial settings, where there are myriad legacy devices, equipment, and machines. According to the Bureau of Economic Analysis, the average age of manufacturing assets and equipment in operation in the US is around 20 years and therefore, they are difficult to access data from.

Tapping into the wealth of this traditionally black-boxed data source is crucial to keeping the machines online, reducing downtime, and increasingly capable through integrations with industrial standards (OPC), drivers, and protocols available on leading IIoT connectivity platforms.

Many IIoT deployments are brownfield in-nature and will need IIoT gateways to integrate with the industrial setting in-place with most organization’s greenfield projects not anticipated for the foreseeable future.

IoT Data Is Increasingly in the Cloud

Data sourcing at the cloud-level experienced a tremendous year-over-year jump of 22% and now over one-third of IIoT report respondents claim to use a cloud platform for IoT. The growing popularity of the cloud as a means to scale IoT stems from its ability to provision on-demand compute, suitable to data rate fluctuations and sheer connected endpoint and data growth in IoT deployments, lowering previous infrastructure and cost barriers that can be major inhibitors to IoT projects. The public cloud’s scalable infrastructure will be increasingly needed as IoT grows out of a single factory and into multi-site deployments.

While some data will remain at the edge for previously mentioned reasons, the cloud’s natural ability to run more complex analytical models of IoT and other system data, will give industrial enterprises pivotal strategic-level insights.

While decreasing year-over-year for IoT data sourcing, existing enterprise systems must remain top-of-mind for integration purposes. There are still vast amounts of crucial data residing in traditional systems, when contextualized with IoT can produce exponential business value. Keeping in purview software applications like ERP, CRM or PLM can be a lucrative data feed for an IoT remote monitoring and services use case, among others.

The data shows, enterprises require a comprehensive IIoT platform with capabilities and integrations throughout the operational and information technology stacks with domain expertise at the edge-level up through the cloud. IIoT traction is shifting to these end-to-end offerings, where IIoT solutions are outpacing disparate bits of technologies as customers are seeking an outcome, not burdensome pieces of technology to operate in a silo.

As mentioned the conversation around IoT data is elevating from ‘how much’ to ‘where’ and then it’ll inevitably shift to ‘how’ and ‘why’ for IIoT workloads and corresponding use cases as they become a crucial component of organization’s digital transformation strategic initiatives.

IIoT Data Processing Increasing at the Edge and in the Cloud
Processing industrial internet of things data continues to be executed at a variety of venues ranging from the edge to the cloud.