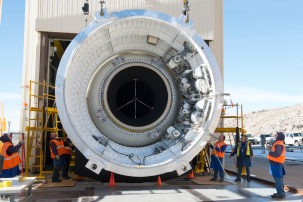 With the successful test of the Orion space capsule back in December, U.S. manned spaceflight moves forward with the development of the Space Launch System (SLS).

Designed to replace the venerable Saturn 5 rocket that launched the Apollo missions to the moon, the SLS will carry the Orion capsule to low-Earth orbit and eventually to the moon and Mars in 2025. The first unmanned tests of the SLS and Orion crew vehicle are slated for 2018.

NASA and contractors Boeing, Orbital, and others, are building the rocket from the launchpad up as part of NASA’s renewed goals for manned space flight using U.S.-built rockets. The SLS is part of a proposed $18.5 billion budget for NASA that also includes funding for further development of new crew capsules, the James Webb Space Telescope, and an asteroid retrieval mission.

The new spacecraft design relies on proven technology, including liquid oxygen and liquid hydrogen RS-25 engines that powered shuttle missions, and upgraded and reusable solid rocket boosters. One of the RS-25 engines was test fired for 500 second in January.

The system will be built in two stages.

Initially, a single-stage system will stand on the launch pad at 322 feet, taller than the Statue of Liberty, and provide a 77-ton lift capacity. The first mission will be an unmanned flight around the moon to test the performance of the Orion-SLS unit.

Work will continue simultaneously on the two-stage configuration, which will provide a lift capability more than 143 tons, or about 20 percent more than the Saturn 5, making it the most powerful launch vehicle in history with the ability to lift a payload of 286,000 pounds into orbit. The team is working on advanced booster rockets to ensure there’s enough power for a trip to Mars.

Eventually the SLS/Orion combo will carry up to four astronauts and service modules on long-duration deep space missions. It will also be capable of launching large satellites into geostationary orbit for intelligence and reconnaissance missions. In the future, the SLS could also provide heavy-lift capability for a mission to divert an asteroid on a collision course with Earth or a robotic exploration mission to Jupiter’s moon, Europa. 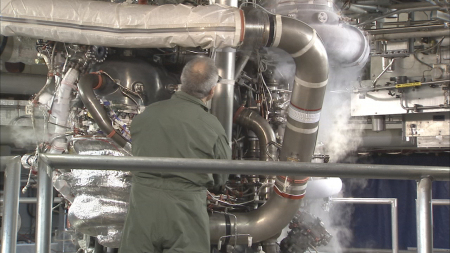 Of course, rocket science has progressed considerably since the days of slide rules, French curves and primitive computers, allowing for more efficient engineering and greater design flexibility, making the modern-day SLS more powerful and safer for the astronauts.

Back in the 60s, designers had to run major calculations on a computer overnight, says John Hanson, deputy system integrator at NASA’s Marshall Space Flight Center in Huntsville, Ala.

Today, the team runs thousands of scenarios in one evening. The team picks a scenario and varies different aspects of the rocket and environment.

“We can run thousands of random cases instead of one case where we put the worst of everything together,” Hanson says.

That depth of analysis helps the team focus on design elements that could improve safety. The team can test changes in structural loads, aerothermal effects, launch tower clearance, and stage separation clearance, as well as wind conditions on launch day.

“If you can only run one case, you pick the worst of the various parameters and pile them on top of each other, and design to meet that,” Hanson says. “If you can run thousands of cases, you can get the bell-shaped curve and decide how much of it you want to cover.”

Improved computer power extends to the onboard flight systems, too. The SLS will use an adaptive control system, which means the onboard computer will be able to retune itself while the rocket is in flight by responding to unexpected differences in the actual flight compared to preflight conditions.

“This ability to react to unknown scenarios that might occur during flight and make real-time adjustments to the autopilot provides system performance and flexibility, as well as increased safety for the crew,” Hanson says.

When it comes time to launch the rocket, simulation software will help the team plant launch assembly and operations. “We’ll know how long it takes and what needs to be moved out of the way to help us avoid snags late in the process,” Hanson says.

The deadline has already slipped from 2017 to 2018 for the first test flight from Kennedy Space Center.

In the meantime, the SLS is in a horsepower race with the Falcon Heavy rocket under development by SpaceX.

SpaceX already uses smaller rockets to launch satellites and send supplies to the International Space Station. Founder Elon Musk says that when the Falcon Heavy rocket flies it will generate more thrust than the SLS system. SpaceX had taken a 20-year lease from NASA on Launch Pad 39A at Kennedy Space Center, which was the starting point for historic Apollo and space shuttle missions, including the Apollo 11 moon landing in 1969 and the first and last shuttle launches in 1981 and 2011.

Detractors of the SLS program say there are cheaper ways to develop the same space lift capacity, including Musk’s privately built Falcon Heavy rocket, or modifying other existing platforms. But, SLS supporters are sure it’s right way to return America to manned deep space exploration.