Tips for Training Your Team on Model-Based Definition 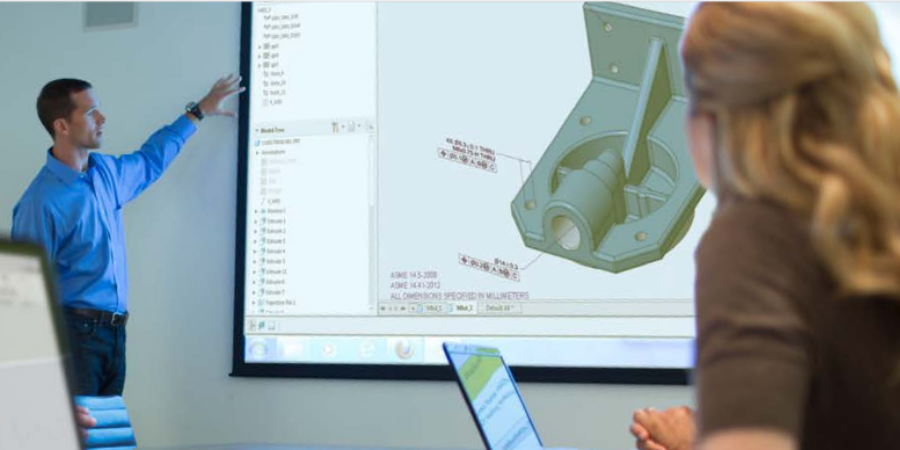 You’ve made the decision to adopt model-based definition (MBD). Now it’s time to train your end users on what they need to know to document product and manufacturing information (PMI) directly in part and assembly models. Let’s take a look at key ideas they’ll need to understand to succeed.

Combination states in Creo Parametric help you set up the visualization of your parts and assemblies exactly the way that you and others want to see them. A combination state includes one or more of the following:

In MBD, though, combination states have an added purpose. We are going to display 3D annotations in our model. If we were to display them all in the default model view, it would look like “a bowl of spaghetti,” with a tangled mass of annotations and leaders cluttering the screen and model. It would be illegible. With combination states, you can determine which annotations are displayed, so they are readable and organized logically.

Annotation planes define the orientation of 3D annotations in the model, but not the location.

Make sure your end users know that the location of the annotation is determined by the first reference selected when defining the annotation.

Now that we have specified a combination state and an annotation plane, it’s time to add the PMI to our parts and assemblies. Most likely, your users already know how to create the 2D versions of these annotations. The transition to 3D simply means specifying the correct annotation plane and geometry references. These annotations include:

For years, we told people if you build your models with design intent, at least 95% of the dimensions that appear on the drawing should come from the model. With MBD, though, created dimensions provide more functionality, like grouping them in features and designating control characteristics for process plans later.

3D annotations have geometric placement references, but users can add non-placement references as necessary. These annotations are “semantic,” or machine-readable. Coordinate measuring machines (CMM) would be able to use your MBD models to inspect prototypes, perform first article inspection (FAI), and support statistical process control (SPC) on production runs,

Now that you’ve documented your PMI in your models with MBD techniques, it’s time to share your models in your supply chain. There are three ways to do this:

There you have it: in a nutshell, everything that you need to get started training your users in MBD. For more information, please see the PTC University classes on Introduction to Model Based Definition with Creo Parametric, available in both instructor-led and web-based versions. Now start reaping the benefits of MBD!