At LiveWorx 2017, which took place in Boston last month, attendees were invited to compete in a timed modeling contest using Creo 4.0. The invitation showed a deceptively simple part that participants would create in less than 20 minutes. 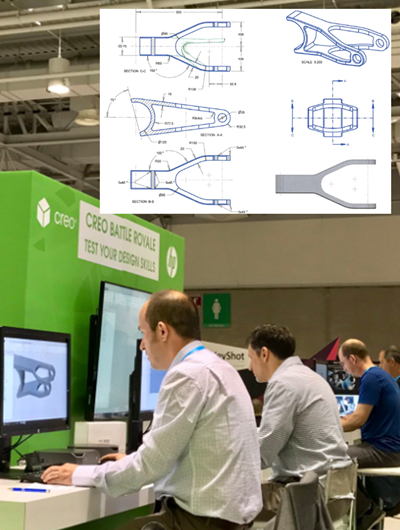 LiveWorks 2017 Battle Royale contestants were challenged to create a model (top right) in less than 20 minutes with a live audience watching.

Jomichael Porter, a principal engineer (BSME, Stanford University) from Texas, and a veteran Creo user, was ready. Creo Battle Royale, as this contest was called, was not his first CAD competition. That was PTC’s Top Gun in 2000, when the CAD product was called Pro/ENGINEER. In 2014, Porter finished as a finalist with Creo, and narrowly missed being the overall winner. This year, he was taking no chances. He shut himself up in his hotel room to practice making the part on his laptop, running through various methods, again and again, timing himself…until he got it down to 5 minutes and 45 seconds.

Unfortunately, Porter’s practice environment wasn’t exactly what he found on the contest stage. Porter honed his skills in Creo 3, but the competition machines all ran Creo 4.

In the first round, he failed to finish first, but he did well enough to make the finals. And that’s where PTC threw contestants a curve ball.

At the end of the day on the show floor, PTC’s Paul Sagar (VP of Product Management) issued a set of changes that had to be made to the part. And the contestants were off, but before Porter could finish making the changes, he heard a contestant—the one who beat him in round one (who unbeknownst to Porter was also the winner of last year’s Battle Royale)—announce that he was done. Luckily for Porter, the announcement was premature. A detail was missing. Porter went on to finish—and win! 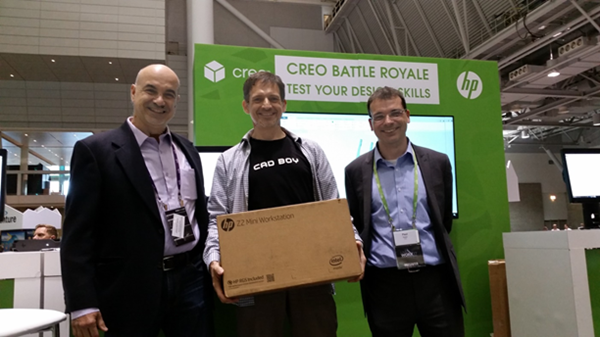 Battle Royale is a fun, light-spirited event, but we can tell the competition is getting tougher. A total of just 30 competitors joined us in 2014. More recently, up to 125 participants have stepped up to the challenge.

And they’re clearly getting better at it.

“This is the first year we had a winner who completed the final change within the 20-minute timeframe,” says contest organizer Tom McKeown, a product manager at PTC.

That said, Porter’s win doesn’t surprise McKeown. Our 2018 winner worked hard for it. Plus, he had a quirky advantage even he probably didn’t know about: Historically, the person with the best score in the preliminary rounds never goes on to win the final prize!

In case you’re thinking of unseating Porter, registration for LiveWorx 2018 will soon be available at www.liveworx.com .

Get More Winning Product Design and Development Inspiration in Your Inbox

Want to keep in touch with all things CAD? Subscribe to our newsletter and get more winning tips, news, insights, and product reviews.